Let’s face it; everyone who is a survivalist thinks they are MacGyver.

To be fair, some are…but most aren’t.

The reality is most people learn survival as they go. And an urban environment is one of the most unforgiving places to learn.

That said, skills learned in the “wild” can easily transition to the urban landscape.

Core skills in all survival situations are straightforward and robust, making it easy to translate to a different climate of landscape scenarios.

However, an urban landscape features a significant number of drawbacks that require a new level of skill not often found in a forest.

What’s an urbanite to do?

From navigating the area to dealing with not-so-nice people, we’re going to drop some knowledge on how to stay alive in cityscapes.

Keep reading to get the low-down on how to survive.

The most obvious concern in an urban and suburban environment is people.

While usually easy to deal with, some people possess the capacity to shoot and slaughter…just over someone using the wrong dumpster.

Put simply, humans are the most constant threat to urban areas, and during a disaster or major event, they will probably be less than helpful.

Not only are people unpredictable, but they are driven by things that nature doesn’t produce.

No one will get killed by a truly greedy bear or a hedonistic wolf. However, mankind is known to do some dreadful things in the name of self and ego.

With so many people occupying city streets, it will be challenging to remain out of sight.

But there’s a whole subculture of survival dedicated to lurking in plain sight. We’re talking about grey man.

Even though the Blue Man Group cornered the market for primary color bands, grey man idea is simple — blend in.

Blending into a crowd is beneficial.

Clothing, gear, facial hair, mannerisms…all of these things make someone recognizable and memorable.

Everyone’s been around a person who wears shorts all year round – even in freezing temps.

While it’s fun to stand out in the crowd, try not to be obvious or obnoxious.

Playing to your audience and staying non-descript will help any person in an urban area in the long run.

Likewise, if there are issues that last for long periods and you’re better prepared than everyone else, it’s important to keep up appearances.

Wearing larger clothes if everyone is losing weight might help to maintain the neighborhood look.

All of the above also applies to your home.

Dwellings that stand out, have odd characteristics, and do not follow the local trend will be noticed.

You know that guy that never trimmed his lawn? Yeah, you know him because his yard stood out.  What about the lady with the bright, colorful mat outside her apartment?

Trust me. There is definitely someone in your neighborhood you recognize and not for the right reasons.

Know the environment you’re in.

When lawns start to get longer, let yours go too. If noise and light levels change, adapt to these changes to remain inconspicuous.

Stay unnoticed, or you may have neighbors trying to capitalize on your energy resources.

2. Stock up on Essentials

The human aspect also puts a strain on available resources.

With thousands or even millions in a small amount of space, natural resources are depleted rapidly.

There have been stories of people digging up roots or debarking trees to cultivate resources. Granted, it’s routinely to produce drugs…

That said, all urban environments possess a finite number of resources, and they are all trucked in.

Once depleted, without a steady stream of incoming goods, people starve.

Telling someone you could “eat them up” may have been a good pickup line in the ’90s, but in an economic dystopia, them are fighting words.

There are no easy solutions to a lack of resources other than stockpiling your own.

Finding new resources in an urban environment is difficult but not impossible.

However, there will be a lot of competition looking for those same items.

Assuming that a bug out was not a possibility and you end up stuck in an urban area, there are a few things you’ll need to stay alive.

All survival consists of five essential needs called the 5 C’s.

Really, it’s a shelter and can be anything from a tarp to a mansion.

The goal is to have a relatively secure and safe environment to sleep in.

Tarps are always great to have on hand as a primary and/or secondary sheltering option.

Secondary disasters, like a house fire or being overrun by jealous people who are woefully unprepared and desperate, may force relocation.

A knife, ax, hatchet, or intensely sharp wit are necessary for immediate skills.

There’s no effortless way to construct a secondary shelter or source firewood without some kind of cutting tool.

For me, I have a whole range of knives I like to carry, but that adds ounces. And ounces weigh pounds when on foot.

However, in the home, a comprehensive range of tools can easily be kept.

There needs to be some way of making a fire for heat and cooking.

While not always available, you’ll need to eat eventually. Freezing isn’t a good idea either.

Woodburning stoves, small camp stoves, fire pits, etc….lots of options exist to contain a fire, but how would you start it?

Keeping matches, Ferro rods, and other fire-making tools at your disposal goes a long way.

If you have to carry something, do it right.

Those cargo shorts might carry a lot of stuff, but they are woefully unacceptable for the long haul.

Backpacks are probably a better option. You can fit way more stuff in them and carry them a lot more comfortably.

But try to remain inconspicuous.

We have a couple of suggestions on the right kind of bug out bags in our Bug Out Bag List.

No matter where you are in the world, you can never have enough rope. (I think I read that in 50 Shades of Grey or something.)

Rope can be used to create unique entrances and exits from buildings to supporting a secondary shelter.

Cordage is a great thing to have on hand.

Additional Needs for the Urbanist

I’d go a bit more in detail and say that there are other essentials needed in an urban environment that will help carry someone for a longer period of time.

In the middle of a rural community, carrying a hunting rifle might be more common. But in an urban landscape, small and concealable firearms are the way to go.

There is a large range of firearm options for urban disaster preparedness and one that deserves a strong and detailed focus.

Check out our list of the Best Concealed Carry Guns to help you narrow down the selection.

Keep maps of where you need to go in the event of a secondary emergency.

Plan what to do to keep yourself and those in your team safe.

I’m a firm believer in a progressive bug out.

That is to say that immediate bug out plans may be near impossible during or immediately after a disaster.

In this event, moving from one main location to a secondary location may involve many stops and quick build shelters along the way.

So, I unpack and repack my bug out bag frequently. This way, I know exactly where every item is.

My attention is not taken from the unfolding events in a true emergency because I need to find a necessary item.

If you need some inspiration on what to include in a bug out bag, check out our definitive list here.

The same applies to vehicle prep in winter conditions.

Having a blanket, some food, and maybe even some water in the vehicle will prepare a driver for getting stuck for a long period of time.

Not worrying about freezing to death will allow the driver or passengers to focus on other important issues that they had not planned for – like who should be eaten first.

To get spun up on what you should keep in your vehicle, head over to Must-Have Gear for Your Car Survival Kit.

No matter what you plan for, there are always unplannable things.

Contingencies can help to lessen the burden when disaster does strike.

One of the greatest contingencies will be medical gear and knowing exactly how to use it.

While fish antibiotics might be trendy, there is no substitute for general first aid know-how.

Need to brush up on those skills? Check out our recommendations for the Best First Aid Classes: Beginners & Intermediates.

There are genuine people who require help, especially if they are underprepared.

While trusting others in a disaster or emergency may seem like a weakness, it can also be a great strength.

Only a group of people can create a thriving community willing to protect and help one another while utilizing their own unique skills.

The struggle with these environments will ultimately remain the lack of human predictability during stressful times.

So, remember becoming inconspicuous, and having essentials on hand will better prep you for urban survival.

Do you have any urban tips to share? Drop some knowledge in the comments below. Ready to dive into more prepping? Read up on all the things you need to survive with Prepping 101 for Beginners and [Ultimate Resource]: Survival & Prepping. 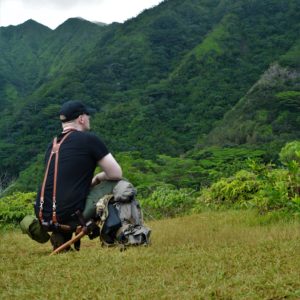 Written By Jonathan Kilburn
Jonathan Kilburn is an avid outdoors-man, martial artist, and shooting enthusiast. He works extensively within the special needs community and uses those skills of improving executive function to establish a set of skills suited for overall survival. His focus has been on urban to rural survival with everything in between. Taking the skills learned in the wilderness and applying them to an urban landscape, Jonathan's survival set is unique and described as: 'weird'.