If you have an AR-15…what’s the furthest distance you’ve shot with it?  How big was the target?  Paper target or steel?

Now imagine shooting further, at smaller targets, perhaps with some time or ammunition limits.  That’s what precision long-range shooting is about: challenging targets, often 300, 500, 700 yards or even further out.

Precision long range shooting isn’t just for large-caliber rifles, though.  There are competitions that allow or are even just for, smaller caliber rifles like the venerable .223/5.56.  (of course, there are better cartridges for long range – such as 6.5 Grendel and .224 Valk)

If you’re familiar with the ballistics of that round, you can imagine how challenging long distances can be with it, between how much even the heaviest bullet in that caliber can be pushed around by even the slightest wind, and how far it can drop as it flies further and further away.

I know, I was a little skeptical too.  I knew my commercial rifles could shoot long distances, but could they be good enough for competition?

In order to figure out some of the best choices that you can buy, I had a chat with my friends at Lone Star Armory first to learn what makes a good precision AR generally.  I’m summarizing, so please remember that all mistakes are mine and not their’s (Editor: Or mine).

Let’s go over what makes a good precision AR-15, and what options are out there for the aspiring long distance shooter.

What Makes a Precision AR-15

Precision long range rifle is all about consistency, both with the equipment and the shooter.  These are the only two variables you can control in a match, so making them as unchanging as possible means you only have to worry about the shooting challenge presented.

The most important part of your precision long range gun is the barrel.  As the tube that actually launches the bullets, the barrel has a vital role in making sure that rounds fly straight and true.

There’s a lot that goes into making a barrel reliably accurate, and you should understand the basics because it can make or break your new precision gun.

It all starts at the breech end, where the round enters the barrel.  Here, a barrel extension is screwed onto the barrel, to provide the locking lugs for the bolt and a feed ramp for your ammunition.

Of course, you want the bore itself, the path the bullet travels through the barrel, to be right down the middle of the barrel.  That you don’t want the barrel to knock the bullet around as it flies is obvious, but less obvious is the fact that if the bore is not straight, the barrel could heat up unevenly and therefore affect accuracy as more rounds are fired.

At the far end of the barrel, where the bullet finally leaves, most rifles will have some sort of muzzle device – a break, a compensator, maybe even a suppressor.  They usually screw on to the barrel, so it’s important that the threads for those devices are also cut well so that the muzzle device doesn’t interfere with the bullet’s flight.

What’s around the barrel also matters.  It should definitely be free floated so that pressure on the handguard won’t affect point of impact downrange.

Since precision long range matches often require you to shoot off props that you’ll wedge your gun against for maximum stability, you don’t want to push your handguard onto a support to make your rounds travel unpredictably because the barrel has shifted.

There are other parts that won’t directly affect the bullet, but you should pay attention to them because they will affect the other part of the equation: you.

For instance, the stock is a key element in how you position yourself behind your gun, so it should be solid and comfortable so that your face and, more importantly, your eye, lines up with your sights or optic the same way every time.

Similarly, a trigger that you are confident with and don’t have to fight will give you one less thing to worry about as you make your shot.

And finally, your rifle should be reliable so that you will be less distracted by the possibility of gun troubles and can simply focus on making your very consistent AR-15 do its thing.

Many people who are serious about the precision long-range game will end up building their own rifles or buying custom rifles made to their specifications.  However, there are some guns that you can buy “off the rack” to get started, that have the important and hard to upgrade bits in place, and so that you can upgrade parts like the stock and trigger later on.

Here are a few that you should consider:

Often better known by their initials, BCM, they make almost everything you need to put together an AR-15.  They have a great reputation for quality parts that can take a beating.

You can also buy complete rifles from them, which are unsurprisingly built more or less entirely from BCM components.  Their precision long range offering is the Recce 18 KMR-A Precision Rifle.

With an 18” free-floated barrel and the usual array of options, it’s a reasonable entry into the precision rifle world.  Keep in mind, however, that there will be an element of getting what you pay for in this world, and that while the Recce can offer sub-MOA accuracy (less than 1-inch groups at 100 yards), you might want a little more.  You may also want to upgrade your stock and trigger over time.

By moving up the price scale a little bit, you can get a POF Renegade Plus SPR.

The Renegade Plus SPR also comes with a Luth-AR MBA stock, which is one of the most popular precision rifle stocks available for the AR-15, and a competition-oriented 3.5-pound trigger.

Our next option will very likely need a new stock, but the LaRue Tactical OBR 5.56 20 Inch (MSRP $2245) has kept costs down by shipping with the plainest of plain stocks. LaRue operates under the idea that you probably already have a stock you like that works for you.

However, its other features still make it well worth the price.

The OBR includes LaRue’s own MBT precision two-stage trigger, a style of trigger that is preferred by many precision competition shooters.

The rifle is guaranteed to be capable of sub-MOA accuracy, with half-MOA and better accuracy reported.  That level of accuracy makes it easier to shoot the further distances and smaller targets you’ll see in precision long range matches.

LaRue has also chosen a handguard with a rail that has 10 MOA elevation built into it – a detail that will become important as you start shooting targets past 600 yards.  Plus there’s the Dillo Dust.  No rifle you can order from any other manufacturer will come with dry rub for your next barbeque.

JP Enterprises is a name that will already be familiar to you if you read my earlier article about out-of-the-box AR-15s for 3-Gun.

In addition to rifles for the faster-paced game of 3-Gun, they also make rifles focused on the precision long-range market – including the one used by Tyler Payne to win the first Precision Rifle Series Gas Gun match, a precision long range match just for semiautomatic rifles.

Unlike every other rifle on this list, the SCR-11 is a side-charger, meaning that you can charge the rifle and cycle the bolt manually without taking your head off the stock.  You’ll need to be comfortable using the side charging handle with your left hand to make it work for you, though.

And finally, I need to give a nod to my friends at Lone Star Armory, not just for their help in understanding what makes a precision AR-15 “precision,” but because they do build an outstanding rifle for long range shooting: the TX15 Designated Marksman Light Enhanced (MSRP $3640). 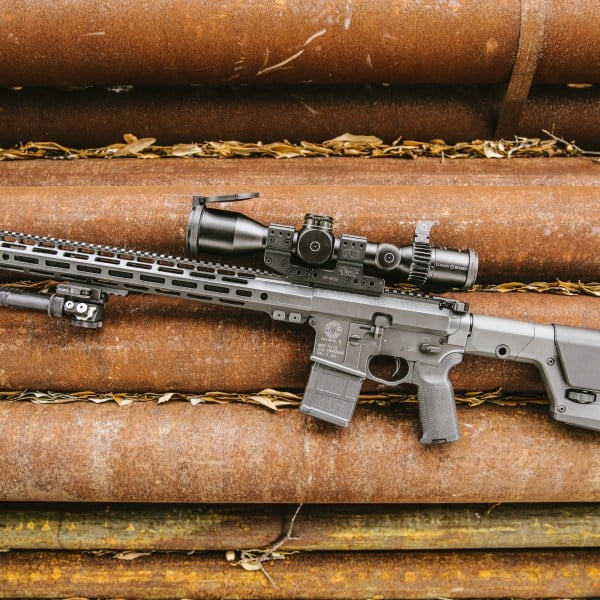 This rifle starts getting into the realm of the true custom gun that you’ll see at the higher end of this type of competition.

The Designated Marksman Light Enhanced includes top components such as the Magpul PRS stock (perhaps the biggest competitor to the Luth-AR MBA stock used in the POF Renegade Plus SPR above), and the Geissele SSA-E two stage trigger.

But most importantly, Lone Star Armory cuts their barrels from blanks in-house in order to meet such exacting standards that they guarantee half-MOA accuracy from this line of rifles.  With the right ammunition, that means these rifles shoot half-inch groups at 100 yards right out of the box.

Excellent equipment sets you up for success in precision long-range shooting almost more so than any other shooting sport, given the extremely high accuracy requirements of the game.

While your skill level and ability to perform are very important, there is very little forgiveness when shooting a small caliber such as .223/5.56 at the types of targets you can expect in precision long range.

Looking for more tips & tricks from someone who really knows their precision shooting?  Check out the Long Range Shooting Handbook.

Any of these guns or other rifles that have the characteristics described will give you a good start.

Use one of these as your long range rifle? Or want to accurize an existing rifle? And don’t forget…a precision AR-15 is only as good as its mount and scope…so check out our Best AR-15 Optics guide.