You know, it wasn’t until relatively recently that I came to fully understand how to find quality guns.

Throughout my life, I’ve purchased some real pigs.

I remember thinking “hey, here’s a pocket pistol for under $100!  That’s perfect for carrying!”

The bright side of the gun world is that only a bit of your money was flushed down the toilet.  Just about every gun dealer will take trades so that festering pile of crap that you bought can get you at least a small discount on a better one. 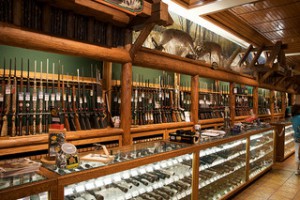 This, however, also opens up a can of worms.

Just because the gun is crap doesn’t mean you shouldn’t get its full trade-in value.

The dude at the gun store is going to try to give you as little for your gun as possible.  That doesn’t mean he’s unscrupulous, mind you.  The nature of the business is to make money and losing money on trade-ins isn’t a very good long-term business solution.

Think about it, this guy is buying something from you with the hope that he can sell it later at a price that will recoup the money he spent buying it from you in the first place.  He knows what he can get for the guns as he’s probably sold a bunch like it before.

That doesn’t mean you have to roll over and take it.  There are some things you can do to increase your chances of getting the best price possible for your gun.

First off, throw away any sentimental value.

The dude behind the counter isn’t going to care if it was your first gun ever or your grandfather’s gun.

Now, if it was a gun that was documented as owned by someone really famous then, and I can’t stress this enough, SELL IT THROUGH A PRIVATE SALE!

Or through an auction house, however, that does involve a bit of a gamble since you may not get the price for it you were hoping for.  Or you might get a lot more.  Like I said, a gamble.

I should note, by the way, that you will almost always get more money for your gun through a private sale than trading it in.

The difference is convenience and effort.

By taking a lower price for the trade-in, you’re essentially paying a fee for the other person to eventually sell it for you.

Anyway, the best thing you can be is informed.

When the guy behind the counter looks at your gun then looks at you and says “ok, what do you want for it?”, don’t just shrug your shoulders.  Also, don’t ask for the brand new price either.

Both of those are telling the salesperson “I have no idea what I’m doing.  Please take advantage of me.”

Make sure you have a reasonable price in your head beforehand.  Let’s go over the basic “rule of thumb” steps for finding the trade in value.

Also, take a look at our articles about GunBroker and Armslist to familiarize yourself with the pros and cons of the platforms.

So, for example, let’s say I have a Ruger LCR .38 with the factory Crimson Trace Laser.

I have only put, say, a dozen shots through it at the most and it is truly in excellent condition.

The used prices on GunBroker.com range from 400-600 dollars.  I tend to grab the middle price, in this case, $500, because that’s how stuff generally falls in my neck of the woods.

So with that in mind, when the salesman behind the counter says “what do you want to get for it”, I’ll look him right in the eye and say “$300” (50% of the used selling price and I rounded up).

So what are the chances that I’ll get that amount?

Not bad for a gun that was just sitting in a drawer completely unused.

If I’m trading this gun in for a pistol with a high-profit margin or dealer sales incentives, well, they might actually give me that $250.

This is because even with the trade-in “discount” they’re giving me, they’re still making a profit over what they paid for the gun.

This is RARE, mind you.

There are only a couple of manufacturers where this is possible.  Believe it or not, the markup on most guns isn’t as much as you think it is.

All of this was assuming you were trading the gun.

If you’re wanting to just dump the gun for some quick cash (essentially pawning it), figure 30%-40% in that case instead of the 50%.

In those cases, you might actually get more for your gun at one of those police buyback programs, controversial though they may be.

In the end, this is just a quick way of determining the starting point.

Fortunately, you have a choice.

If they’re just insisting on low balling you, just walk away.  Say “thank you for your time but no thanks”, collect your gun and try somewhere else.  Don’t ever feel pressured to go through with a transaction you’re not comfortable with.

Remember: knowledge is power in all cases, not just dealing with salespeople.

Ready to look at some of the best guns/gear out there?  Check out our Reviews section!