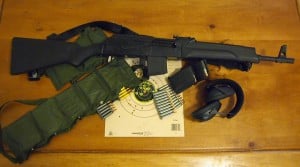 A saiga (say-guh) is a kind of antelope that lives in eastern Russia.  Kind of a weird name for a rifle, but then again it might be appropriate.

Have you seen a picture of this thing?

It’s an ugly animal, and the Saiga rifle that shares its name is an ugly rifle.  But a rifle doesn’t have to be a beauty queen to be effective.

Let’s get on with this review!

The Saiga rifles (there’s a line of shotguns too)  comes in .223, 5.45X39mm, 7.62X39mm and .308.  It comes with a crappy plastic handguard and stock, no flash suppressor or muzzle brake, and the magazines are expensive.  Those are things that can be improved upon.

What it has going for it is its heritage.  You see, the Saiga is a direct descendent of an AK.

The Saiga’s action and internal parts are, with a few exceptions, the same gun that you see on the news every night in the hands of armies, rebels, religious fanatics and madmen throughout the world.

They’re made at the Izhmash factory in Russia, the same factory that was once run by a man named Mikhail Kalashnikov, who invented what?

So that other stuff, the stock, the handguard, etc., that stuff can be changed (and we’ll get to that).  Where it counts, the Saiga is a Kalashnikov, and better, it’s not some old rebuild first put together by slaves in the old Soviet Union.  It’s a new, factory-produced Kalashnikov, and if you’re looking for a dependable rifle that will eat anything and take a beating, that’s a good thing.

As I mentioned, the Saiga is, for all intents and purposes, an AK-47, and it functions the same way.  To disassemble the rifle, you press a button at the rear of the receiver and remove the receiver cover.

Once that’s done you take out the receiver spring, the bolt carrier and the bolt.  Now you can clean it.  Pretty easy.

The Saiga will reliably eat just about any ammo you want to feed it, which means that you can feed this rifle some pretty dirty ammunition.  So you want to clean it.  But aside from routine cleaning, there’s not much you have to do to this rifle to keep it functioning. 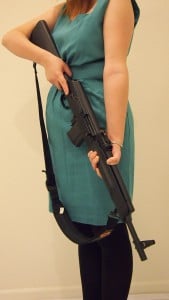 Like other AK-47 patterned rifles, the Saiga 223 has a safety lever on the right side.

And I do mean a lever.

It’s not a very comfortable gun in the stock configuration.  Also, as my wife pointed out, like the SKS it’s heavy up front and not well balanced.  The recoil for the .223 version is very manageable, but it is there.

So you have all the stuff that would come with an AK-47, but whereas on a regular AK-47 you could carry this stuff with you, you can’t on the Saiga.  It comes with one 10 or eight-round magazine, depending on the caliber you buy.

Okay, up until now I’ve made this rifle sound kind of bad.

The good news about the Saiga is that it can be upgraded.

Companies like Tapco sell stock and grip kits if you want a pistol grip and telescoping butt-stock.  New handguards can likewise be found.  If you’re feeling really ambitious and willing to spend a little money, a Saiga can be upgraded to the point where it looks and feels and operates like a modern Russian assault rifle.

While shooting my basic configuration model Saiga .223 at the range for this review, a man two tables down from me had a 7.62X39mm variant that he had had modified to the hilt.  It was a whole new rifle, and as long as you are 922 compliant, you can do the same.

The downside is that even if you buy the 7.62X39mm version, you can’t use regular AK-47 magazines.

The Saiga is a pig, but it’s a pig that carries a lot of potential.

When you look up the Saiga on the internet and read what people are doing with their Saigas, it’s like an episode of Extreme Makeover.

People don’t buy Saiga rifles for what they are, they buy them for what they can become.  Before that point, it is still a serviceable rifle that’s modestly priced and will put a round on target.  You’ll never make it a sniper rifle, but no Kalashnikov ever has been.

Personally, I think the Saiga fills the role that the SKS once did.

It used to be that if you wanted a durable rifle for when shit hits the fan, the SKS was what you wanted.  It was cheap, it hit hard, and it was simple to operate.  The Saiga, I think, is sliding into that role.

For one thing, it’s safer than an SKS.  It’s basic configuration is modestly priced . It has a detachable magazine, and it comes in four different calibers.  Plus, a Saiga can be scoped.  In all those categories, the SKS really only beats the Saiga in price, and not by a whole lot nowadays.

The cherry on top, and I swear Izhmash must have thought of this because I have a hard time believing it’s accidental… it doesn’t look like an AK-47.

This rifle comes with a 10-round or eight-round magazine, and it won’t take regular AK-47 30-round magazines.  No flash suppressor, no muzzle brake, no pistol grip.

This gun was designed to slip past an Assault Weapons Ban.

So if you’re looking for an emergency SHTF rifle, the stock Saiga is a good choice.  If you want a base platform on which to build an AK-47, you can do that too although you’ll have to balance the cost with simply buying a Romanian WASR10.

To sum up, the Saiga is a good emergency gun, a good project gun, and it’s big enough to hunt with.  It won’t win any points for ergonomics or comfort, but it wins for life in reliability.

Yep, Ive got one. You sum it up pretty well. Its not the nicest, not the most accurate, but its been 100% reliable. Mine shoots about 4 inches at 100 yards. Not really too impressive, but not hateful. The price is allot less then the entry lever AR. Mags are expensive and some lack quality despite price. Surefire mags have proven to be 100% reliable. Others not so much. Mine serves for home defense as I live in a very rural area with out any other houses near by. For that I think its well suited. If you want to push the limits of your target shooting abilities, well this is not the rifle for you. If you want a reliable, semi auto at a reasonable price for sub 100 yd ranges this is a good choice. Not that the rifle cant exceed 100 yds, it can, but not with great accuracy.

you know you can install a bullet guide and it will take ak47/74 mags for about $20 with very basic tools, right?

I bought a .223 and did many mods including the bullet guide like JW mentioned and now I get Tapco mages for $14 and they have never failed. Mine is for home defence also so no far shooting, has a holo sight anyways now. I got most of my stuff from http://store.carolinashooterssupply.com I’m all around happy with my Saiga.

I bought my saiga 223 in 2007, I have put many rounds through it and consistantly shoot clay pigeons at 50 yards then shoot the remaining broken pieces. What more could you want out of an at the time inexpensive rifle. It has never failed and I have shot some cheap junk ammo through it. I put a Hawke 3/9 power scope on it and a green lazar. Hey it works great for me.

Yep u all sum it up well. It’s reliable, fairly inexpensive and combat accurate. I agree with all comments. Mines good for 3-4 inch groups at 100 yards. Never shot it further than that though I’m sure it could. Stock sucks, no nice way to out it. Got a Krebs rear peep sight and a trijicon night sight up front. Guns no more accurate but makes target acquirement allot faster. Oddly enough mines on HD duty as well. Sure fire mags have produced no issues.

I wish i could find one for $300 or less :/…does anyone know where i can find one thats available around that price?..

I have a Saiga .223 Cal. rifle which I love. I want to remove the trigger assembly to clean it up for a smoother trigger squeeze. To do this I have to remove the (2) rear rivets which will destroy them. So…….I need TO FIND (2) replacement rivets!!!!! Have no luck in finding them.

Does anyone know where I can buy some, or….have a replacement IDEA??? HELP!

I have a question. My Saiga , is marked as .223 Rem. Can I fire military 5.56 ammunition in my Saiga. I read that manufacturers are making their .223 rifles adaptable to 5.56 to avoid legal concerns.

Old Hawker to let you know about your question the answer is yes it’s marked in .223 Rem but it takes 5.56 that’s all that I put through my Saiga Federal 5.56. Also strangely my Saiga came with a (35) round magazine, and pistol grip.

I have the 12 ga., .308, .7.62×39, and .223. All have been converted to “tactical” defense weapons. The .308 had a trigger job done so that it has a smooth straight pull. At 100 yards with all of the rifles, I’m able to consistently eat the center out of a 6″ stick on target placed over the throat area of a torso silhouette target, with just iron sights. I shoot primarily steel case Russian ammo (Monarch mostly), and mix both NATO designated rounds with other. These Saiga’s will indeed eat whatever they’re fed!! The 12 ga. with the 20 round drum has to be the most deadly close range weapon available – no matter whether it’s slugs, buckshot, or birdshot, there’s a massive amount of lead or steel coming at you in just seconds! Rest in Peace, Kalashnikov …you created an amazing weapon!!

i bought one a 223 in 2012 and moved the trigger forward and put pistolgrip and adjustable stock and forarm pistolgrip,the galil 30 round mags work great if you install a bullet guide witch i did.paid $370.00 for it and put another $150.00 in it and the thing works wonderful ,did all the changes myself,if you can use basic shop tools you can too.arsenal does the samething i did and charge $900.00 for there guns .you can get all the stuff to change it at carolinashooterssupply.com and they have good peices.i bougth the saiga at classicfirearms.com in north carolina

I have the 223 model an I love it. I mostly use tula brand ammo through my rifle an @ 100 yards my grouping is about 3″ or so with iron sights. This gun has potential if you want to upgrade. I kept mine stock except for a bolt on flash suppressor. I use my rifle for rodent control an home defence. I would recommend this rifle to anyone who wants a good reliable gun.