When people mention “Russian” or “Communist Bloc” weapons, they automatically think of the AK-47, but before the AK-47 changed the world, there was the Samozaryadnyj Karabin sistemy Simonova or “SKS” for short.

The SKS is a gas-operated, semi-automatic rifle chambered for the Russian 7.62X39mm round.  Despite being a military rifle, the SKS is not an “assault rifle.”  It has a fixed, non-detachable 10-round magazine, wood stock, and a manual safety.

So should this be the rifle for you?

As a plinker, a hunter and a defensive weapon, the SKS has a few things going for it.

The recoil is very mild, my father once calling it “a big .22.”  Russian-made ammunition such as Wolf or Brown Bear is cheap, and the SKS will eat it all.  The 7.62 round is big enough to take deer, not as powerful as the .30-.30, but close enough to put dinner on the table.

And while not as modern as the AR15 or AK-74, and though it has fallen out of favor in 1st world militaries, many 3rd world militaries as well as revolutionary groups still use the SKS.  The 7.62X39mm round is the same round used by the AK-47. Stopping power isn’t an issue.

There are, however, some things that the SKS isn’t great at.  For instance, it wasn’t designed for an optic, so mounting one can be problematic.  Although break-down, for the most part, is easy, to remove the firing pin for cleaning (and you do need to clean it) you need a hammer and punch.

So let’s break it down.

To break down an SKS for cleaning and maintenance you first make sure the weapon is unloaded and placed on “SAFE.”  There’s a knob on the right side and toward the rear of the receiver.

Holding the receiver with one hand, you turn this knob and then pull it out as far as it will go.  This unlocks the receiver, and you can now remove the receiver cover, the recoil spring, the bolt and the bolt carrier.  Once you have the bolt, you’re going to need your hammer and a punch.

Some SKS’s come with a little “egg” with a bore brush, punch and patch holder that fits in a hidden compartment in the stock, so check the stock, you may already have one.  You have to use the punch to knock out the firing pin retainer in order to pull out the firing pin.  Putting it back together is basically the reverse.

The SKS is a pig.

People will tell you to wash it with water or Windex, but that comes down more to using corrosive ammunition than anything else. (Hint: A lot of the surplus Russian military ammunition that you see so cheap online is that cheap because it’s corrosive to the rifle.  Shoot it or not is up to you, but if you do, CLEAN YOUR RIFLE IMMEDIATELY AFTER SHOOTING IT.  Further tip, most online ammo distributors will tell you if the ammo is corrosive.  If it doesn’t, ask.) 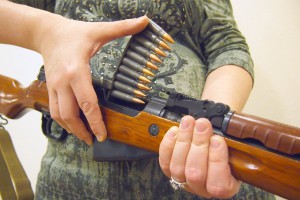 Most SKS rifles, except for early Russian models, use a free-floating firing pin.

The hammer hits the firing pin which hits the primer, but there’s no spring pushing the pin back into place.  Instead when the bolt pushes the next round into battery, the pin is pushed back into place by that round.

Why is this a problem?

he problem comes if too much crud builds up in the channel that holds the firing pin.  Keep in mind, what’s pushing that pin back into place after each round is the primer of the next round.  So what happens if that pin gets stuck in the forward position?

It’s called a slam-fire, and it basically makes your SKS an illegal and uncontrollable machine gun.  That’s why the firing pin has to be cleaned and cleaned correctly.  Should this ever happen to you, HOLD ONTO THE RIFLE.  Keep it pointed down-range, and let it go until it stops.  Ten rounds is going to go quick, but the only way it’s going to stop firing during a slam-fire is for it to run out of ammo.

Letting go of the trigger won’t stop it.  Don’t panic.  Keep control of the rifle.  Keep it pointed down-range and wait it out.

So now that I’ve scared the bejesus out of you, how reliable is the rifle?  Comm-Bloc weapons are renowned for their ability to go bang no matter what and the SKS is no exception.  Simplicity of design combined with a rugged set-up means that this weapon is going to fire.

There is a manual safety next to the trigger guard, but aside from that it’s going to go off when you pull the trigger.  Firearms expert Massad Ayoob, in an article written for Backwoods Home Magazine, has a few warnings about the SKS.

“SKS rifles are cheaper, but beware; some will go off when dropped, and some of the more poorly assembled ones will “double” or fire two shots when the trigger is pulled once.”

Ayoob’s been working with guns for a long time.  If he gives you a warning, you heed it.

As I mentioned before, the recoil on an SKS is mild for a rifle shooting a .30 caliber round, certainly nothing next to a .308 or .30-.30.  So recoil isn’t going to be your big comfort issue.

Your biggest issue is going to depend on how big you are.

SKS’s, particularly Chinese Norinco SKS’s, were not made with six-foot-three Americans in mind.  The stock on this weapon is very short, and you feel it when you shoulder it to the point where it’s uncomfortable.  You can alleviate this by replacing the stock or adding a butt-pad.

This is a military surplus weapon.

You’re not going to get much to start.  I

f you get the whole package, you’re going to get a bayonet, a cleaning rod that runs along the bottom length of the barrel and the little egg I mentioned earlier.  The good news is that the market is flooded with SKS upgrades and accessories.

Keep in mind, though, that there are laws governing how you upgrade your SKS, U.S. Code 922r.  If you intend to replace parts like the stock or add a pistol grip, you need to do some research because once you start replacing parts on an SKS, you have to replace a certain number of them with U.S. parts.

It’s rugged, powerful enough for hunting or defense and doesn’t rise to the level of “assault rifle” that makes so many politicians pee their pants.

Outside that niche, though, it doesn’t do anything great.  It’s okay at everything, but it’ll never be a marksman’s rifle.  It’s hard to scope.  Likewise it’ll never be the kind of assault rifle that is the AR15, AK-47 or Golani.

A jack of all trades and a master of none.  The Saiga rifles do the same things only with detachable magazines and more choice in calibers.  The biggest thing going for the SKS is its price tag.  They can still be found for just over $300 online.  If you’re looking for your first rifle, pass.

If you’re looking for something affordable that does everything well but nothing specifically great, you can find an SKS just about anywhere.

A superb site like this that gives a total entertainment for everyone who are novice in using rifle and or who seeks a professional insights on using rifle is indeed useful and informative enough that helps educate a novice one. [ firing pin journal dot com ]

The feedback regarding the SKS (norinco), this one chinese, mfg in 1963- Is simply particularly arrogant, and misses the mark by a wide margin. This PARTICULAR rifle,which found its way to me thru an uncle, who was in the army, stationed in Germany around the time in 1968 he presented this fine firearm to me, who was 15 at the time. I sighted it in that winter, and was the teenage son of a family living near Estacada Oregon, we had a redwood tree farm on 55 acres, and an abundance of deer,rabbit, coon,coatimundi,skunk,squirrel,ring-tail-cat, coyote,opossum,antelope,Elk,feral cats,woodchuck,otter,mole,gopher, and more… with the exception of the uncommon Coatimundi,I did a fine job of decorating the back-side of my fathers barn with multiple skins and hides of each and every one of the critters I mentioned, with the exception of an Elk, which I used my Ruger 7-Mag with instead. The SKS is an excellant rifle, easy to use,easy to clean,Deadly accurate, and small and compact. I have many,many other rifles, but this Norinco unit is the cats-ass. Do not hesitate to buy one, as either a spare or principle hunting rifle, and makes a terrific “first-gun-for-the-boy rifle, inexpensive,and easy to find. Call me anytime, and please dismiss the revue that criticises this great rifle, and try it for yourself. M.C.Thomas,South bend,Indiana

Thanks for making yourself available. I have a Chinese SKS in 7.62 x 39. I’ve looked all over but can’t find a quality replacement trigger for it.

Any help would be appreciated.

Thanks for making yourself available. I have a Chinese SKS in 7.62 x 39. I’ve looked all over but can’t find a quality replacement trigger for it.

Any help would be appreciated.

I am selling a 97 SKS Norinco. Would like to use the money to get a shotgun for my home. Rebuilt stock but still have the wooden stock. With 2 20 round mags and a 40 round mag. If interested please contact me by email: [email protected]

I have a stuck firing pin retaining pin on my Russian SKS. After searching for hours, ffound much info suggesting to soak in mineral oil then aggressively pound the retaining pin out with a punch and mallet. This is the ONLY site that informed me that the cleaning kit in the stock actually HAS a punch for removing the pin! I had wondered what that tool was for.