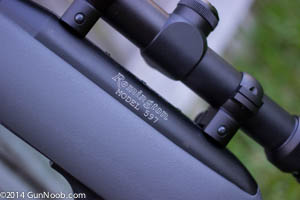 Let’s talk about hipsters for a moment.  They generally have very productive jobs and have above average income yet dress like homeless people, all in the name of irony.

They criticize things for being mainstream and brag about liking things “before they were cool”. Don’t get me wrong, I’m not ripping on hipsters.  I’ve been a hardcore nerd since I said my first word as a baby (“condominium”, for those who are wondering) so it would be hypocritical for me to criticize a fringe culture.

I bring up the culture because I have a feeling that this review is going to get VERY hipster.  So put on your grandpa hat, don’t shave for a while and grab your scarf and skinny jeans.  Today, we’re talking about the Remington 597.

So if you want a semi auto rifle chambered in .22LR, what do you get?  If you said the Ruger 10/22 then you are SOOOO mainstream.  Everyone gets the 10/22.  As far as the internet is concerned, the 10/22 is the only .22LR rifle there is.  Nothing else exists.  There is no reason to look any further.

Hidden in the gun store equivalent of the independent music section you might find a Remington 597.  This is Remington’s answer to the 10/22 and, for all intents and purposes, it’s a pretty decent answer.

So why not buy a Ruger?

Well, for starters, many versions of the 597s come with a pretty decent scope at no extra charge.  There’s quite a few sub-models of 597s that come with some pretty neat configurations.  With the 10/22, you get the basic gun then you have to tweak it and fiddle with it to make something interesting.  With the 597, you can start out halfway to where you want it to be.

The very basic rifle, however, is pretty nice.

This one came with the scope and, like I said before, it’s a pretty darn good one all things considered.  The 597 also has a composite stock and, to me, feels much lighter than a 10/22 which means I can shoot it from a standing position longer before my arms give out (yes, I am a weakling).  I know you can get a composite stock for a 10/22 in the aftermarket but the 597 was shipping with them before it was cool. 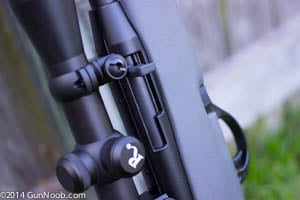 Let’s talk about the scope a bit more.

Normally, I’m a bit wary about bundled stuff like that.  For the most part, you usually get some generic tube with some plastic at both ends that they jokingly refer to as “glass” and the crosshairs are drawn on with a sharpie marker.

In this case, it’s not too bad.

I don’t know if I would recommend this scope if it was sold on its own but it doesn’t fall into the “better than nothing” category either.  I think the best way to put it is “It works absolutely awesome with this gun”.  It holds zero perfectly and it’s nice and clear. It also came with some yellow tinted slip on protectors.

There is no “field stripping” this gun.

It’s a process and it takes some work.  Tools will be needed, swear words will be spoken.  The factory trigger is also strangely delicate.  During the reassembly, I accidentally bumped one of the pins in the trigger and it fell off rendering the gun unusable.  I didn’t find this out, however, until I had it all back together and did the function test. So then I had to break it down again and slip the pin back into place.

Still, I’ve had worse (looking at you, Hi-point).  At least with this one I only needed a screwdriver and some needlenose pliers.  No hammers necessary: 3 out of 5 hats.

Once it was apart, cleaning wasn’t too big of a deal.

Any gun chambered in .22LR is going to be filthy beyond all reason so some extra scrubbing is to be expected.  A rifle BoreSnake for .22LR was able to take care of the barrel easily.  Getting the grime out of everything else was easily taken care of as well.  For such a tiny round, there aren’t many tiny spots with this rifle.

I only had to break out the cotton swaps once to get into a tight area.  As I’ve mentioned before, keeping a .22 gun clean is best described as a Sisyphean task.  This gun at least makes it a bit easier to push the boulder up the hill. 3.5 out of 5.

When the 597 was originally released, it came with plastic magazines.  Not polymer, mind you, actual plastic.

The reliability, or lack thereof, was notable…to say the least.

Shortly after, they switched to all aluminum magazines and the problem was solved.  Now the only reliability issues come from the .22LR itself.

The .22LR round is a double edged sword. It’s cheap so you will shoot a lot.  Shooting a lot gets the gun dirty.  When the gun gets too dirty, the .22LR doesn’t have enough umph to power through the grime and the gun’s reliability takes a nosedive.

I’ve yet to find a .22 that didn’t follow that pattern.

The big question is “how long until the inevitable?”

With the 597, it seems to start having problems at about the 100 round mark.  At that level, you might get one every other magazine’s worth.  At the 300+ mark, I was getting one issue every magazine.  Keep in mind, I used the crappiest, cheapest, most embarrassingly bad ammo I can get my hands on and most of failures were probably a direct result of that.

As I said in the last .22 I reviewed, I feel a bit weird judging the reliability of a gun who’s ammo is notoriously unreliable.  Is it the gun’s fault?

I can’t think of a single problem where I can say 100% for sure it wasn’t the fault of the ammo.  The fact that it got worse as I shot more prevents me from saying it was 100% the ammo’s fault.  I’ve stewed over this score for more than a week. 3.5 out of 5

It’s got a manual safety on the trigger guard and that’s about it.

Now, it’s harder, in the grand scheme of things, to injure yourself with a rifle.  Most accidents concerning rifles come from breaking rule numbers 1, 2 and 3 (and sometimes 5) and the injured party is usually someone other than the person holding the gun.  Traditionally, every rifle has only had one manual safety switch or button.

There are sometimes internal safeties but even those are kind of rare.  To be honest, I may have to rethink my test guidelines for rifles as we get farther into the Year of the Rifle.  In the meantime, a single manual safety on pistols has usually warranted a 3 out of 5.

Considering that I take similar guns into account when coming up with the score, I can’t penalize it for having the exact same safety mechanism as 98% of the market.  Still, since there are a small number of guns with slightly better safety stuff, I’ll rank this one at a 4 out of 5.

The .22LR platform is a great way to learn how to shoot a rifle.  This gun is very stable, the trigger is very nice and when the ammo behaves, it shoots like a dream.  There’s not much more I can say on it. 5 out of 5

It comes with a scope and a magazine.  As I said before, the scope is a lot better than many bundled scopes I’ve seen in the past and, the mere fact that it comes with a decent scope puts it way ahead of the competition.  It does, however, have the dreaded “single mag syndrome”.  Compared to the rest of the market, it’s not bad. 4 out of 5

If you look at the 10/22, which most consider the gold standard, the list of accessories is almost absurd.

You can get kits that will make it look like at AR-15.  There’s kits that can turn it into a replica of just about any movie gun.  While there isn’t the crazy amount of accessories for the 597, there is a very respectable market out there.  Everything from new stocks to drop in triggers to barrels and more is available.

Give it a few more years, if Remington doesn’t go crazy and ruin the gun mind you, I could see the accessory market for this gun give the 10/22 a run for its money.  Even now, it’s catching up. 4 out of 5 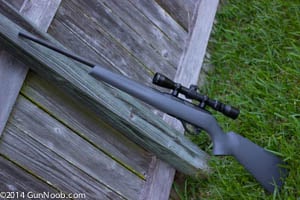 I’ve noticed that, as I’ve written this article, I keep using words like “not bad” and “pretty decent, considering” a lot.

That’s a perfect summary of this gun: pretty decent.

It’s not the greatest rifle in the world but, let’s be honest, even the absolute best semi-auto .22 rifles aren’t that great in the grand scheme of things.

Even the beloved 10/22 has issues on a regular basis due solely to the fact that the .22LR is just not a quality/dependable round. If you want a dependable gun chambered in .22LR, the only way to do it is to reduce the number of moving parts.  This puts the list, in order of dependability at:

You’ll notice that the semi-auto is dead last on that list.

Don’t get me wrong, I’m not knocking this gun or other .22 rifles in any way.  To do so would be hypocritical of me. We still have to be honest with ourselves, however.  Knowing the faults of a gun is important and the fault lies solely in the ammo.  I still maintain that every gun owner should have a .22 rifle in their collection and this one is a great gun considering the price.

You can’t go wrong with the Remington 597.   Averaging the scores give us a final score of 4 out of 5.