Do you know one type of gun that’s remained untouched in an era of innovation?

And it’s time we talk about one of the coolest, best shooting, and innovative revolvers on the market – the Chiappa Rhino!

Lots of companies are still producing normal revolvers, for sure. Colt even brought back a few, and Kimber introduced one, on top of all the offerings from S&W, Ruger, Taurus, and more.

But…what is different about them?

Ruger, Taurus, and S&W all introduced revolvers using polymer to create lightweight designs. Charter made a neat system for automatic, rimless rounds that doesn’t require a moon clip. That’s it, except for one little company out of Italy called Chiappa.

They took the six gun and employed a little bit of creativity to it. Chiappa employed a fella named Emilio Ghisoni, and he teamed up with another guy named Antonio Cudazzo to design something truly unique.

The Rhino shares a lot in common with the Mateba, but it’s not a semi-automatic gun.

These two Italian designers gifted us with what’s become one of the coolest guns in decades, the Chiappa Rhino. The Rhino is a fascinating revolver. What it does differently from a traditional revolver is position the barrel in alignment with the lowermost chamber of the cylinder.

Most revolvers position the barrel in line with the topmost chamber of a cylinder, and they always have. The Rhino’s barrel is placed so low for a reason, and it doesn’t just look cool it’s functional.

It’s All About That Bore Axis.

We hear a lot of garbage about bore axis in the firearms industry. If you want to make fun of SIG Sauer, then point out “How high” their bore axis is. Then you can feel smug on Facebook.

Bore axis in automatic handguns, in standard calibers like 9mm, .40 S&W, and .45 ACP is a joke. People like to claim that the bore axis of a gun like the SIG will cause more muzzle rise and muzzle flip. Does it?

Yep, it sure does, but in these cartridges it’s infinitesimal. If I drew you a pie chart of all the reasons why people cannot shoot quickly and accurately bore axis wouldn’t even be mentioned.

Sorry, that’s my bore axis rant. I used to fall for the same hoopla.

However, a revolver allows the barrel to sit much lower and can be chambered in much more powerful rounds like the .357 Magnum. This is where we see the significant difference in bore axis. The Chiappa Rhino has hardly any muzzle flip.

Even when loaded with full powered .357 Magnums the Chiappa hardly moves. Don’t be mistaken, you still feel the recoil, but there is hardly any muzzle rise. You can keep the sites on target without much difficulty.

This low bore axis makes the gun incredibly comfortable to shoot, and it’s hard to describe it until you try it. It is a brilliant design.

On to the Review

Now that we’ve addressed the Rhino in the room that is the oddball design we can talk about the Rhino a little more in depth. The Rhino comes in a variety of sizes with model numbers that express the barrel length.

The interesting design features don’t end there. The “hammer” for example is not a hammer. It doesn’t move as you fire the gun. This hammer appearing thingy is a hammer-cocking device that you can thumb the gun into single action mode with. The device will then go back to what appears to be an uncocked position.

A red indicator sticks up when the gun is cocked into single action mode. Positioned behind the ‘hammer’ is a lever that releases the cylinder and makes it easy to open the cylinder with one hand.

Additionally, to reduce the profile of the gun the cylinder is hexagonal and not round like a traditional revolver.

The sights are fully adjustable, and there are a variety of sight options out there. These sights are blacked out in the rear, and the front is a red fiber optic sights. The grip is wood, which is somewhat cool on such a modern revolver.

The Chiappa Rhino 40DS is a big gun but looks bulkier than it is. The 40DS weighs 1.87 pounds, which makes it lighter than most of the 4-inch revolver competition out there. The weapon has a 4-inch barrel and is 8.5 inches overall.

The Rhino 40DS is a fun gun to shoot. It looks cool, and it’s very comfortable. As I mentioned above the weapon has minimal muzzle rise and its perfectly pleasant to shoot with .357 Magnums. It can also handle .38 Special and with .38 special loads its perfect for teaching new shooters how to handle a revolver.

The red fiber optic front sight is very easy to pick up and small enough to avoid covering small targets at longer ranges. This sight makes it easy to reach out and touch a target. Speaking of, the gun is plenty accurate for shooting out to 35 yards on smaller targets.

On man-sized targets, the sky is the limit, as is your skill level. Out to 75 yards, I bet you won’t have issues hitting a man-sized target especially if you cock the weapon into single action mode. 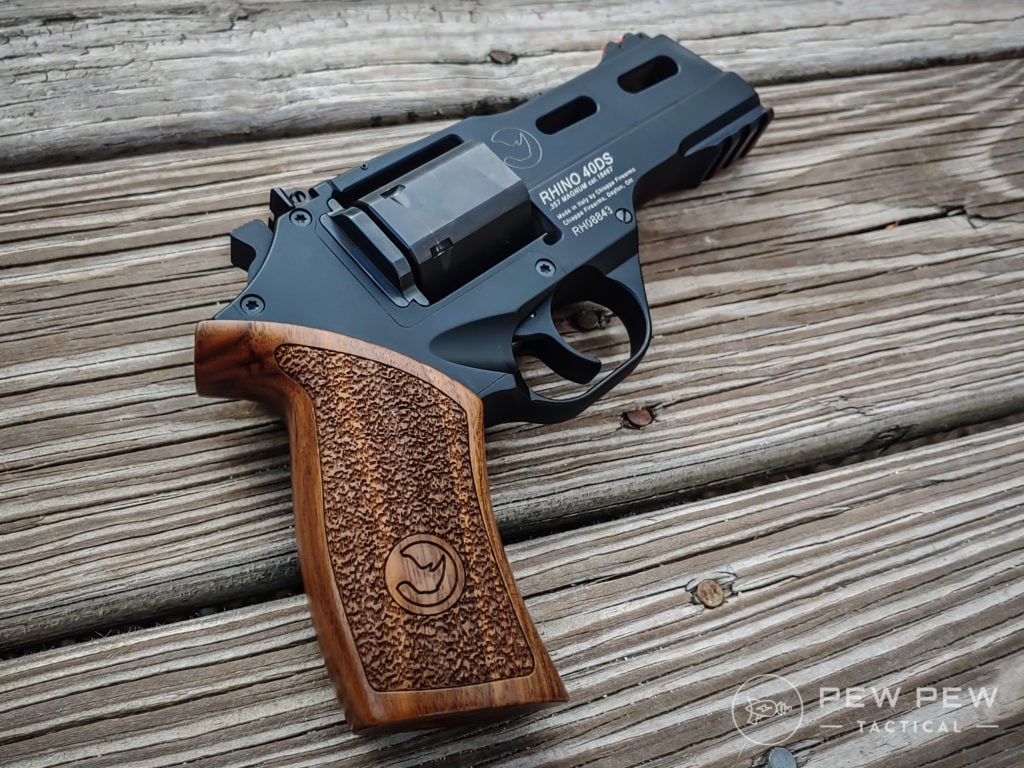 If this weapon is going to serve a defensive role the double action is much more important than the single action. As a revolver, the Rhino is reliable as a gun can be. It ignites ammo both cheap and pricey, including Tula .357 Magnums and their overly hard primers.

I will say the biggest downside, in my opinion, is the gun’s grip. It looks nice, it points nicely, but it doesn’t feel my hand very well. It’s just too small for me. I do have big hands, and I think a bigger grip would benefit me.

The grip is also excessively smooth and feels like it wants to slide around in my hand. If it wasn’t for the low bore axis, the Rhino 40DS has I feel like it requires me to shift grips every few shots.

The aftermarket for the Chiappa Rhino is somewhat small.

There are some holsters out there, some custom speed loaders, and speed strips will always work with the Rhino. In terms of what I would choose for my Rhino given its limited market, I would go with the following.

While the Rhino is a revolver of the future, it’s still a revolver, and a leather holster is a great way to carry your gun. This model is made for the 40DS and is an OWB holster for concealed carry. The Combat Master clings tight to your body and is a pancake design.

The Combat Master is a little boomerish, but a revolver deserves leather and always will.

Like mag changes if you are going to carry a reload you best know how to use it. It’s not safe to practice with live ammo, so spend a few bucks and buy some Snap Caps. These are perfect for practicing those reloads safely and realistically.

Bianchi made the original Speed Strip for revolvers and continue to do so. The Bianchi Speed Strips are designed to make carrying reload simpler than a speed loader. Speed strips are flat and fit easier in pockets and still allows you to carry six rounds.

They are slower and do require more practice to use efficiently. They do allow you to top off your revolver should you only fire a round or two in self-defense.

It’s a flipping revolver. It’s either a 5 or a 1, and there is no in-between! It’s certainly not ammo or primer picky, and it goes bang when you pull the trigger. The cylinder always opens, the hammer still cocks, and it all just works.

The gun is plenty accurate, and you can reach out and touch a target. The gun points very well, the sights are small but easy to see, and the rear sight is adjustable. I knocked one point off just because the single action is very meh. The Rhino is not a cheap revolver, and I’d prefer a crisper SA design.

The gun is plenty ergonomic. The controls are well thought out, and you can tell the design is from a shooter for shooters.

The hexagon cylinder makes it easy to grip when reloading with a speed loader, the hammer cocking device is easy to reach, and of course, the cylinder release is perfectly placed. It loses one point for the smallish grip in my gorilla hands.

I mean c’ mon, this thing is cool as hell. There are a few reasons why it ends up in movies like Ghost in the Shell, Suicide Squad, and Total Recall. It looks like it stepped out of the pages of a comic book and I can’t help but love it.

There isn’t much you can do, you can change the grips, add a light maybe, and that is about it. It gets two because of that rail and how rare a rail is on revolvers.

This is a pricey revolver, with the average price of the 40Ds being around 800 bucks it’s a tough sell. At least to me, it is. For 800 bucks and some change, you can get a 686 Plus Performance Center revolver with more rounds, a better trigger, and comparative sights.

Overall this is one of my favorite revolvers. It’s not perfect, but it is just so freakin’ cool. It’s fun to shoot, easy to hit your target with, and the futuristic look and design make it a unique experience.

The Chiappa Rhino is an ultra-cool gun. As far as revolvers go, it’s tough to take the concept and improve upon it, but two Italian designers managed to find a way. The Rhino is also more than just a gimmick. 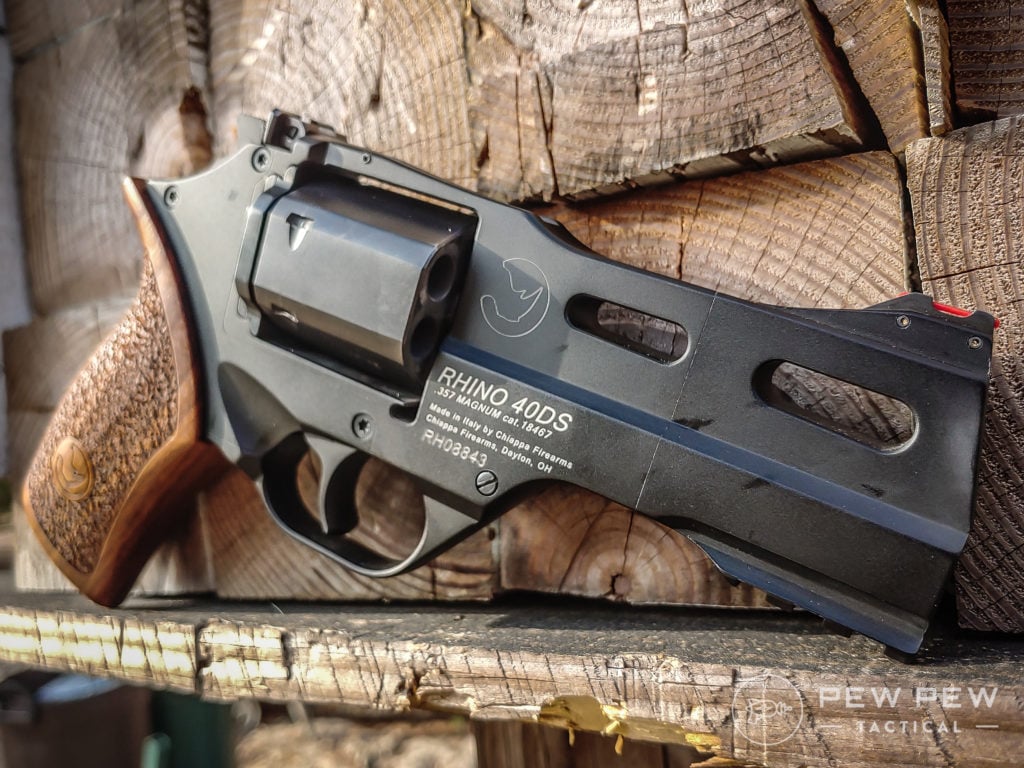 Plenty of guns come out with a gimmicky feature and rely solely on that feature. The problem is they lose focus on how to make a good gun. The Rhino is a good gun. It’s more than just a low barrel profile.

The gun features excellent controls and ergonomics, a decent trigger, and several innovations that leave most revolvers in the dust. The Rhino isn’t perfect, but I’ll be damned if it isn’t my current favorite revolver.

What’s your take on the Rhino? Is it cool enough to enter your collection?  Otherwise check out our other favorites in Best .357 Magnum Revolvers.