Firearms development is on a plateau.

While the AR and the AK rule the modern sporting rifle world, the next frontier of innovation is in our scopes…and our phones.

The Sig Sauer BDX might not be the best thing since the metallic cartridge, but it is one of the coolest and most intriguing inventions to come to the gun store near you in a long time.

I might not have a magic 8 ball or a glowing crystal ball, but looking through the BDX and it feels like I do – because this is the future of optics.

What Is The BDX

Sig Sauer’s Ballistic Data Xchange (BDX) is not a single item but rather a system consisting of three things – a range finder, scope, and an app on your smartphone or tablet.

They can work separately, but really they need each other to be impressive.

A short answer to this question is that using the three parts of the system, data is fed to your scope to dynamically change the reticle to match your current range and bullet drop giving you a simple illuminated dot that you place on the target for the perfect hit.

Here’s a short video of us zapping different ranges.  Watch the lit reticles change.  And that brighter dot on the left?  That means we were tilted.

The Kilo range finder is the most simple part of the system, it works like any range finder would and doesn’t really have any surprises under the hood, except for its BlueTooth ability to talk to your phone. But more on that in a moment.

What really starts to set this apart is the Sierra BDX scopes, because these are not your average scopes at all. Most good long-range or hunting scopes will have Bullet Drop Compensation dots or lines indicating the drop you can except at set ranges.

Sierra scopes achieve that same idea but using very small lights to give you the exact placement of your dot based on the data given by your app and range finder. 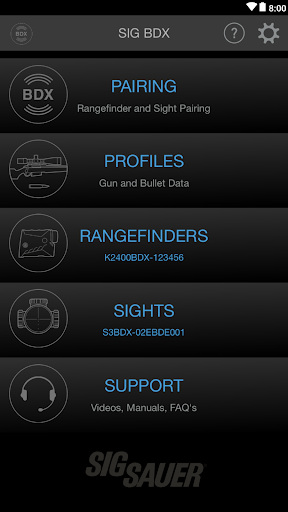 Finally, the app is the brains of the operation. It does the math, communication, and heavy lifting. You can set profiles, input load data, and even set custom zeros for the scope.

Yes, they hunt too.

While this technology has huge potential and unlimited applications, right now what this is really designed for is hunting and due to its nature, the kind of hunter that will really get the most out of the BDX system is not your uncle Fudd.

But if you’re willing to put some time into learning the system, it will give you a major edge to your hunts and make those long shots far easier to make and to take your game ethically from ranges you might not be able to do so now.

For someone like me where Mule Deer are commonly taken from 250-400 yards across canyons, this can be a huge force multiplier.

Since the BDX has such a huge range of applications and ability to pre-load multiple calibers/loads, I wanted to run through a whole wack of options to see how accurate the data and math would be.

I quickly found that this is easier said than done…the app is great, works nicely on my Andriod OS, but it is a bit slow to input all of the data.

It would help to have a desktop version of the app that I could use to import the cartridges and profiles into my phone!

On top of that, once you’re in the field and trying to USE the BDX, things can get odd. Somehow, after pairing the app and scope while at home – an hour later it was no longer paired at the range. I tried to pair it, and the connection failed. I closed the app, reopened it, and it was magically paired again. 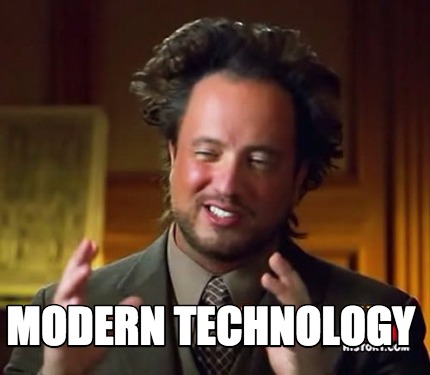 After that first hiccup, everything ran great. And the maths were all rock solid on point. After zeroing, the BDC dots all worked perfectly at 100, 200, and 300 yards.

Most impressive – it worked perfectly across all 3 rifles, 2 calibers, and 5 cartridges I tried it with.

Once you have your rifle, scope, and cartridge load dialed it you can use the BDX BDC dots to near perfect effect. I was able to transition between targets and ring steel with complete ease.

The range finder function also worked spot on. Zeroed at 100 yards, I was able to range and ring the steels with no problems.

One thing of note – this is a fairly time-consuming process to set up each profile and cartridge. This would quickly become way too much work if I was trying to swap rifles often like I was doing during testing. Instead, I would opt for this to be a dedicated scope on a dedicated rifle using maybe 3 or 4 cartridge loads at most.

Sig Sauer has great glass, I’ve never looked through a Sig scope and felt disappointed. It does feel busy though, with the lines for the dots and the reticle itself – it feels more cluttered than it really is.

Also, and again this must be due to the illuminated dots, the reticle lines themselves are T H I C C.

They have to be for the illuminated dots and since this is a hunting optic, that isn’t a huge deal. But it does, in part, prevent you from being able to use this as a hyper-precision long-range scope if you wanted to do so.

That said – the glass is good. There isn’t much distortion at the edges, colors are firm and sharp, everything is very crisp to look at out to at least 400-yards.

Before you look at these pictures, let me say that for some odd reason taking pictures through this scope was HARD. Other scopes, I’ve had very little problems. But this one was nuts.

The eye box is great, the glass is good, I think there is something about the thickness of the reticle or the fact that there have to be some electronics in it that was just throwing my camera off bad.

I was completely unable to get a picture while at the range and at home I was only able to get the lighting and focus right by taking it from inside the house, looking through a glass door, into my backyard. This has clearly degraded the clarity of the scope by a fair degree – however, my main goal is to show you the reticle and this was what I had to do to make it happen.

The dots are much smaller than the lines so there is that at least, but at 100 yards I could only see the edges of my 1″ square bullseyes and at 200 yards the dot effective covered them completely.

Again, the clarity and light transfer of the scope is very good (but not as good as I hoped it would be) and these images do not remotely do justice to that – these were so you could see the reticle, not the glass.

When I first tried the BDX system at TriggrCon 2018, my first thought was the awesome possibility it would have in the competition world. But these thick reticles are a bit of an issue.

If Sig will be able to thin the reticle lines and give some more magnification options, I think we’ll start seeing it in PRS roles – being able to set up custom reticles and ranges every time you go to a match would be wicked awesome!

Everything worked every time I tried it – nothing ever failed on me. But there is one issue…since all of these runs on software, it needs to be updated. Thankfully, during my pre-range-trip inspections, I’ve seen every time that it needed an update before heading out. I don’t know what would happen if I had taken it into the field and then tried to use it on an old version of the software, but it is something I’ll be careful about.

That said…if I was taking this on a once-in-a-lifetime hunt, I might back a backup scope in my rifle bag just in case technology decided to not work the morning I go stalking.

Scope worked every time. After I zeroed it all I needed to do was change the settings and poof – right on target.

Sig really did a nice job with the range finder, it fits well in the hand and has some rubber over-molding to give you a decent grip even when your hands might be wet from sweat or rain.

The Sierra scope knobs are not my favorite. Zoom and illumination are tight but workable. The parallax knob is VERY stuff though with ultra-aggressive texturing for grip, so aggressive that it kind of hurts.

The app is amazing. It has basically everything you can think of and the ability to add handloads with profiles, custom settings, and so much more. As a tech guy, this is a NICE app!

If you’re gearing up for a hunting trip of a lifetime – say an Elk trip, then getting a BDX system is a no-brainer! The ability to set your scope perfectly for your load, range a target, and know basically exactly where your shot is going to land is invaluable when you’re taking a once in a lifetime shot.

But for the average hunter, it’s going to really depend on what you hunt and where you hunt it. I hunt deer in California where 300 yards is the average shot, my brother-in-law hunts deer in Wisconsin where it’s unheard of to take a shot past about 75 yards.

For me this system is amazing and I really look forward to filling my tag this season with it. But if I was shooting at point-blank ranges, I would find it hard to justify the cost over a more traditional scope.

Tools that make hunting easier and surer of an ethical harvest are great to have, but this is a niche set of tools for a niche clientele. Every part of this system works when you need it to and honestly offers more tools than most people will ever use.

If you’re interested in this idea for a scope then I highly recommend the Sig BDX – it really doesn’t disappoint and is great to use. 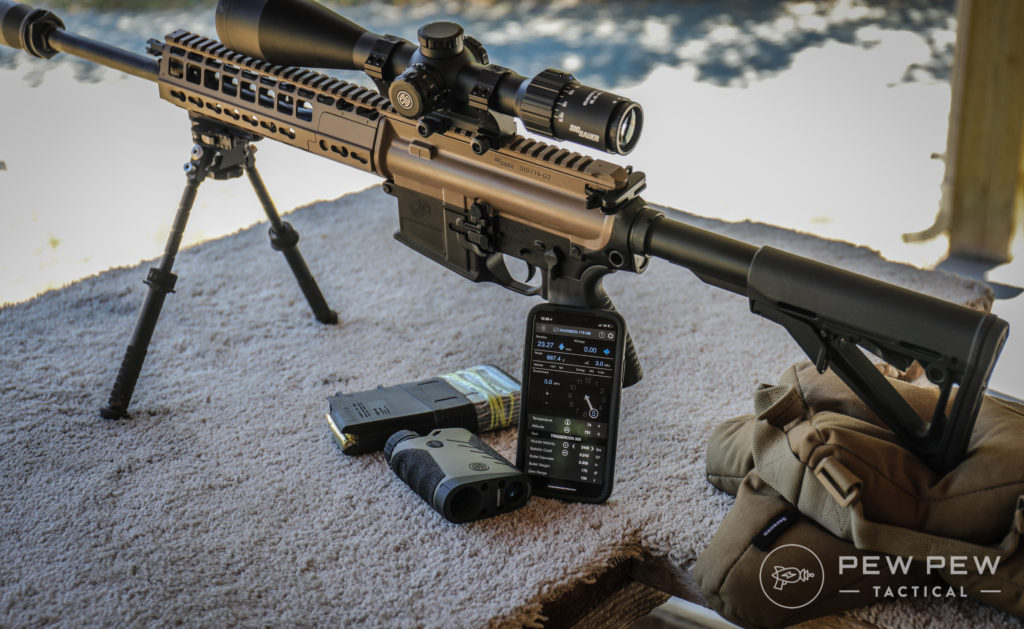 My hope is that this is just the start and that Sig will improve this tech and expand it to other applications, but until then I look forward to taking this into the field next deer season to see if I can fill a tag with it.

Maybe looking for something closer range or less techy?  See some of our other favorite picks for Best Scopes & Optics.

Written By David, PPT Editor
David is an Editor for PewPewTactical! Learning how to shoot at a young age in the Boy Scouts, he now spends most of his time working on or with firearms. Be it shooting, upgrading, building, tinkering, or writing about them - sharing his passion and knowledge of firearms with others is an everyday occurrence.