Everything about this gun screams tacticool.

From its military-adjacent history to its uber accessorize-able design, the FNX 45 Tactical is a beast of a handgun.

I’ll be completely honest; this is one of my grail guns. I’ve wanted one for as long as I’ve been into firearms.

My local gun range had one available for rent, and I would always go in and drool over the FNX 45 Tactical and Osprey 45 combo.

Like peanut butter and jelly, mac and cheese, boomers and 1911s — it’s like they were made for each other.

FN also developed a (what I would call) neutered version of the FNX 45 Tactical.

The FNX 45 does not feature the raised night sights, the optic cut, or the threaded barrel.

Still, if you live in California and you want an FNX 45 variant, it’s worth the consideration.

Many things make the FNX 45 Tactical a formidable firearm, and we’re going to explore those today.

We’ll look at the history behind the handgun, what makes it cool, and areas that may make it a hard pass for you.

Ultimately, you’ll walk away with a better understanding of whether this FN deserves a spot on your gun shelf.

The story of the FNX 45 Tactical begins with an entirely different gun — the FNP 45 Tactical.

Developed for the U.S. Joint Combat Pistol Program, the FNP 45 Tactical came chock full of goodies, as you’d expect from any other gun designed for the military.

So, it makes sense that its successor is better.

Released in October 2012, the FNX 45 Tactical was the new sheriff in town, if that sheriff was robocop and drove a Tesla truck.

Featuring an aggressive grip, interchangeable backstraps, and a threaded barrel, the FNX 45 Tactical had things that other manufacturers had not even dreamed of yet.

The kicker? It all came in an FDE package.

Now, of course, these aren’t all that uncommon. Back in the day, however, a manufacturer making these stock was unheard of.

Has the cool-factor of the FNX 45 Tactical caught your attention yet?

The FNX 45T is admittedly a pretty niche gun.

In my mind, it really only makes sense if you plan on-duty use or range fun.

Other than that, it’s too large to conceal for most and not the best suited for competition.

It features a stainless-steel slide assembly and measures 8.6-inches in total length! Furthermore, it stands 6.5-inches tall with a width of 1.5-inches.

No wonder it measures in at 33-ounces unloaded.

Fret not. This behemoth comes loaded with features that justify the size and continue to uphold the standard of modern firearms today.

Don’t let the weight scare you. The FNX 45 Tactical wears it well.

As mentioned before, some of the accouterments that come stock on the FNX 45 Tactical include aggressive grip, interchangeable backstraps, and a threaded 5.3-inch barrel.

That’s already more than some models out today, but the FNX 45 Tactical goes above and beyond.

Even by today’s standards, that is fairly impressive.

Why are these things amazing?

When it comes to shooting a handgun, grip is everything. That’s why you see all the more modern firearms offer interchangeable backstraps. Additionally, shooters often stipple their guns for added grip.

Both of these problems are solved with the FNX 45 Tactical, and you don’t have to spend an extra dollar to make it right. (Although, the talon grips are pretty a e s t h e t i c.)

Next, the Trijicon suppressor-height night sights and optics cut.

If you’ve had any other gun — which if you’re reading this, you probably have — you know that sending your slide out to get milled for optics can cost a pretty penny.

When you eventually pony up and send it, your old non-suppressor height sights are all but useless. This could cost $300 or more!

The FNX 45 Tactical comes stock with these amenities. Sure, it’s an expensive handgun, but in an industry where turnaround times can be over two months, one must ask, “What is my time worth?”

Okay, enough gushing over the paper stats. Features don’t matter until we answer one question…how does it shoot?

If you couldn’t tell by now, I’m a huge fan of this gun. So much so that I’ve been racking my brain on how I might be able to EDC it. The FNX 45 Tactical is a chunky boi.

Probably one of the softest shooting .45 ACP handguns that I’ve shot.

The low bore axis and balance of this gun work hand in hand to make it easier to shoot than most 9mm!

The sights fall right back to where you just left them, but the grip angle contributes to this immensely.

With and without a suppressor, I was able to make a — let’s say — “combat effective” grouping at around 50-yards with a Holosun 507c.

For me, on a gun that I don’t even have half a year of reps on, that’s serviceable.

At closer ranges, I was able to go faster while remaining accurate.

To really put myself to the test, I tried the dot torture test. It’s still a workout, but the gun is balanced well and, in my opinion, much easier to shoot than other .45 ACPs I’ve tried.

As expected from a military service gun, the FNX 45 Tactical will handle whatever type of ammo you throw at it.

I used everything from less than optimal (read: range) ammo to hand-loaded ammo. I didn’t have a single hang up or malfunction.

Large primer, small primer, whatever, the FNX 45 Tactical will eat it up and demand more.

It’s not all sunshine and rainbows, though…

Oh, and while we’re talking range time, what about shooting suppressed?

Early models had a litany of reliability issues that FN seems to have since corrected.

Problems included: failure to feed, failure to eject, and failure to lock the slide back on the last round. But again, FN seems to have corrected this problem long ago.

There are still some drawbacks to this duty-oriented workhorse, though.

Let’s start with the most glaring problem – the trigger.

The FNX 45 Tactical is a double-action/single-action gun.

In so many words, that means the first pull will be long and arduous, while the second is short. Cool. Understood.

The guys in the forums will say it’s a “combat trigger.” And the CZ 75 and M9 Beretta also use this function. It’s great for duty use.

However, the FNX 45 Tactical seems to have an unusually long and hard trigger. It’s also pretty gritty.

Sure, you can train through this, but you shouldn’t have to.

FN is capable of making a better trigger. So why haven’t they?

But surely the aftermarket stepped up, right?

So far, only trigger jobs are available. Whether that’s on your own or sending it into the boys at MK3 Firearms, your options are pretty limited.

In fact, the aftermarket options for the FNX 45 Tactical are limited across the board.

As sure as the sun rises in the East, you will have trouble finding holsters for this firearm.

Most major manufacturers don’t make holsters simply because there just isn’t much demand.

So far, the best options are DME, Dara, and Tier 1. However, the PHLster Enigma and shoulder harnesses also show a lot of promise as alternate options.

That’s quite a tall order for anything other than duty use. Even in the context of duty use, that is quite heavy.

Still, concealing this will be no easy task and may not prove the most comfortable.

As you might imagine, a purpose-built duty gun holds up well over time. Mine doesn’t have that many rounds through it, but I’ve shot ones with thousands of rounds with minimal maintenance. They age like fine wine.

It is what it is. No sugar coating, the FNX 45 Tactical doesn’t have the best ergos. The safety juts out pretty far, and it’s a chonky boi. What do you expect from a gun that holds 16 rounds… .45 ACP, no less?

Accuracy on this is fair. In my opinion, with a finely tuned trigger, this beast could be worlds more accurate. It gets the job done, though, and does so well.

Although it comes out the box ready to go, there isn’t much in regard to customization — you must search far and wide. After weeks of searching, I was only able to locate slide cuts and a custom trigger job.

That said, it’s an amazing accessory host. From flashlights to red dot sights to suppressors, the FNX 45 Tactical accommodates it all. It might weigh a ton, but honestly, who cares. It’s not like you’re throwing this behemoth on for a 12-mile ruck or anything.

The FNX 45 Tactical is like a good soldier. It does what it was trained to do and excels at it. It’s okay at other things too, but admittedly not the best.

The FNX 45 Tactical was built for duty, and it excels in just that. Whether suppressed or unsuppressed, it shoots like a 9mm with all the cool factor of .45 ACP in just as many rounds.

It’s completely modern by 2021 standards, making it all the more impressive when considering it launched in 2012.

It’s undoubtedly an amazing firearm that does one thing extremely well and everything else “serviceably.” But as Garanddaddy says, nothing matters if you don’t look cool. Damn it; you will look cool as hell with the FNX 45 Tactical on your hip.

Have you shot the FNX 45 Tactical? What do you like about it? What do you hate about it? As always, let us know in the comments below! Want to see more FN goodness? Check out our reviews on the FN Five-SeveN, FNS-9, and FN 503. 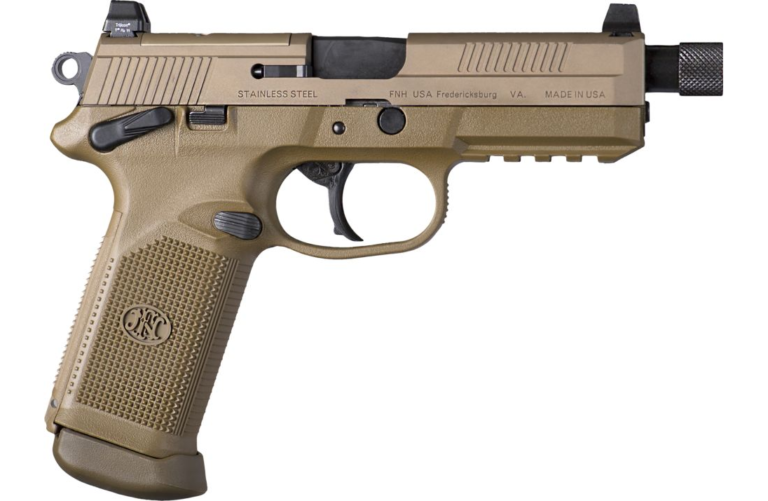 Written By Justin Chang
Justin is a firearms enthusiast who spends his time jumping between the tactical world and competition shooting. He started shooting when he moved to Texas and has since been thoroughly immersed in all things that go bang. In his free time, he can be found researching everything from guns to ballistics to gucci gear.