We talk a lot about guns around here, but guns are of course only half of the “pew pew” equation. Guns are great, but they’re only really as good as the ammo.

Now, if you’re here, you probably already know all about the differences between cast bullets, hollow points, FMJS, and such. The ammunition basics, if you will. 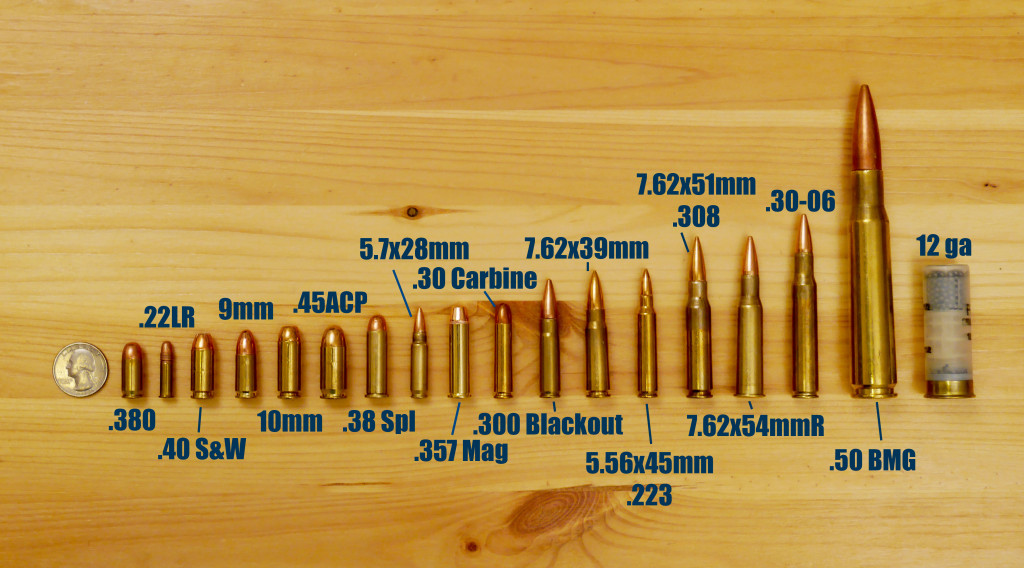 Of course, there’s so much more to ammo than just what you can easily find on the shelf at your local sporting goods store. Much more.

Today, we’re gonna talk about some of the wilder and crazier ammo types that are out there, the types of things you have to special order and pay extra hazmat shipping charges on. Don’t worry though… it’s worth it.

Note: It should go without saying but I’m going to say it anyway–check your local, state, and federal laws regarding any of these ammo types before you purchase, and in the case of the incendiary ones, take extreme care when shooting around flammable materials such as dry grass or other foliage.

Shotguns are the gateway drug of the exotic ammo world. They open up a whole host of opportunities to use interesting ammo that you just don’t get the chance to use with rifle ammo. Here are some of our favorites!

If you’ve heard of any of the specialty ammo on this list, you’ve heard of dragon’s breath rounds. These are shotgun rounds, usually 12 gauge, that lets loose a stream of fire about 30 yards long when you pull the trigger.

This fireball burns at around 4,000 degrees Fahrenheit and is sometimes used to kick off controlled burns, but mostly it’s just used to make one great big cone of fire come out of your shotgun barrel.

Dragon’s breath rounds (also called flamethrower and “firewall” rounds, depending on where you buy them) are loaded with lots of little magnesium balls that ignite shortly after leaving the barrel to create a brief, but brilliantly bright and incredibly hot gout of fire that can do serious damage if you aren’t careful.

Definitely keep this one on sand and dirt, maybe out in the desert or an empty field somewhere unless you’re actively trying to burn something down.

And I would say that using it indoors, such as for home defense, is going to be just as bad for you as it would be for an intruder.

If you’re looking for something that’s a little more “Oooh, ahhh” than “OH GOD,” flare rounds might be a good option. These rounds work just like normal signaling flares and are available in a variety of colors.

While flare rounds are still a fire hazard, they are much safer than dragon’s breath rounds in that respect, and they’re not nearly as likely to start a brushfire (though you should still be very careful with them).

These flares work great as emergency signaling devices out in remote areas and are perfect for backcountry hunters and those who live a little off the grid, but still want to be found by emergency services should the need arise.

Also, they’re just darn fun. You can turn your shotgun into a miniature multi-colored fireworks mortar for relatively cheap… they’re still $5 or so a pop though, so pick your moment carefully.

The result is a very different round from most out there. You have two fairly mobile ball bearings attached to each other by a cable that’s dangerous in its own right at the speeds it’ll obtain when fired from a shotgun.

Unfortunately, accuracy is abysmal and performance is… questionable.

I don’t know how effective these things would actually be in a self-defense situation, but I doubt they’d do better than a regular slug would, and they’ll certainly be less accurate.

Picking them up just for fun to plink at an old box or to try and shred a can? That I can see being worth the cost of admission.

Flechettes are tiny steel darts that first saw heavy use in the heavy jungle environments of Vietnam. Imagine a shotgun that fires hardened nails rather than buckshot, and you’ll be in the right ballpark.

At close ranges, flechette rounds can put a cluster of steel darts through dense foliage, soft body armor, and even thin sheet metal. It goes without saying that anyone getting hit with these is going to have a tremendously bad day.

For practical self-defense purposes, you’re probably still better off with 00 buck, but this is one of the few rounds on this list that I can see being a realistic option for serious defensive use. For the cost and the only marginal effectiveness at range, I’d just as soon have buckshot though.

Especially since “Why is this home invader full of steel darts?” isn’t a question I really want to be asked by law enforcement. The steel nature of the darts and their mild armor-piercing capabilities also mean you’re unlikely to make friends with police officers who know you have these things, and they’re outright illegal in several states precisely because of the danger they pose to officers wearing kevlar.

All in all, I’d call them a fun novelty to bring out when you want to cause a little destruction at the range, rather than something you should rely on for home defense. If that’s all you have on hand though, it’ll certainly get the job done.

Rifle Ammo To Impress Your Buddies

Not a shotgun kind of person? No worries!

There’s still plenty of fun you can have with your rifle. Here are a few weird ammo options for the rifle-shooting readers out there.

Tracer rounds are just plain cool. Expensive, but cool. They have a magnesium tip that ignites chemical compounds, usually strontium-based, that are applied to the end of the bullet. This burning compound causes the round to light up and be much more visible than a normal bullet.

Tracer rounds are primarily used by the military, who use them for shot marking and target acquisition. One soldier lays down fire on a target or position, and suddenly their entire squad has a bright red line showing them exactly where to shoot. Pretty handy in a sustained gunfight.

They can also be used by machine gunners to make sure they’re suppressing close enough to a target, and in some cases can be loaded close to the end of a soldier’s magazine to give them a very visible indicator when they’re about to hear a click instead of a bang.

There are three different types of tracer rounds: bright, subdued, and dim. Bright ones are, as the name implies, the most visible version and is probably the best for civilian use as most civilians are going to be using them for fun at the range, rather than serious defensive purposes.

Dim tracers are almost entirely for use with night vision optics, and subdued tracers have a delaying effect built into the tip that causes the bullet to ignite one hundred yards or more from the barrel. This makes it harder for enemies to follow the tracer path back to its source. Most modern tracer ammo has at least some delay effect like this.

Like the flares and dragon’s breath rounds, tracers are incendiary (with some exceptions we’ll get to in a minute), so be careful about using them around dry foliage or in windy conditions.

Modern science and the desire to shoot laser beams like a Star Wars character have given us the non-incendiary tracer, called Streak Visual Ammo. Streak Visual Ammo uses a non-burning phosphor compound painted onto the back of the bullet to give the shooter a tracer-like effect, without the risk of torching anything nearby.

They produce no heat or flame and are therefore perfectly legal most places that tracers are banned, though you should still check your applicable laws. They give more of a laser beam effect than the mini fireworks show you get with tracers, and they look like a lot of fun for night shooting.

They’re also available in a variety of colors, and at $12 for a box of $20, they aren’t half bad on price either, at least not for specialty or novelty ammo.

If you’ve got a .50 cal already, you’ve already got something that’s going to make your range buddies more than a little jealous.

But if you want to be a little more extra about it, get some fancy ammo to go with it.

If you’ve ever wanted to punch a flaming hole into an engine block, this is the round for you. It should go without saying that you should be extremely careful not only of your target, but everything behind it for several miles when you use this.

Armor piercing incendiary rounds also somewhere above the tracers but below the dragon’s breath rounds on the fire hazard scale. On the scale of pure fun though, they’re off the charts.

Other Cool Stuff You Didn’t Know You Wanted

Of course, we civilians have limited access to the really cool ammo.

First, tank ammo is so very like our standard centerfire ammo, but also incredibly different. Take a look at how HEAT rounds, or High-Explosive, Anti-Tank rounds work.

The primer, when ignited, kicks off the propellant charge that drives the round forward towards the target. And no matter how far away that target is, penetration is the same.  That’s because the effect of this round is based on the shaped charge in the nose, rather than the pure kinetic force of a solid sabot or depleted uranium round.

These anti-armor rounds explode on impact, and send a directed explosion through hostile armor to utterly destroy anything on the other side, and do considerable damage to the vehicle (or building) itself. All in all, much cooler than anything any of us can get our hands on.

To Sum It All Up…

There are some really interesting specialty rounds out there, some fun, some terrifying. If you choose to buy any of these, you’ll probably find something fun to do with them at the range–just be safe. Very few of the “off the wall” ammo varieties out there are terribly practical, especially for civilians, but some of them sure are a blast at the range.

Which of these specialty rounds is your favorite? Want to see more ammo reviews? We’ve got ’em! Want more odd stuff? 4 Weird Tactical Things On Amazon (that aren’t all that bad).