Of course you don’t, because that’s the sound of a gun with a silencer on it and silencers make guns completely silent!  They’re super dangerous and should never be in the hands of gun-owners, especially criminals.

Back in the land of reality, however, silencers, also known as suppressors, are actually useful in reducing the noise level of gunshots and helping to preserve the hearing of hunters and gun-enthusiasts everywhere.

Luckily for us, some effort has begun in recent years to make suppressors more accessible to the general public, though we’re still a ways off from the days of walking into your local gun store and buying a silencer off the shelf.

While “silencers” and suppressors” refer to the same thing in the eyes of the law (specifically our buddies at the ATF), it’s important to point out that silencers are anything but silent.  If your only interaction with silencers is what you’ve seen in movies, then you probably think they make gunshots sound like little laser blasters.

If that were true, then silencers would be amazing!

Unfortunately, silencers, which we’re going to refer to as “suppressors” from now on to avoid any confusion, can’t reduce or eliminate the noise of a gunshot to anywhere near the level portrayed in movies.

In fact, the guy who invented the suppressor also invented the car muffler at the same time, because both items effectively do the same thing.  A suppressor traps the expanding gas that comes blasting out of the barrel of your firearm (that pushes the bullet along with it), and the extra space allows the gas to dissipate at a slower rate and cool down in the process.

By the time the slower and cooler gas exits the chambers of the suppressor, there is less pressure difference between the gas and the outside air, and the “pop” of the firearm is reduced.

For anyone who is lucky enough to have experienced shooting a firearm with a suppressor attached, you know that the gunshot was definitely quieter.

Quieter, but not silent.

A typical gunshot from a firearm, whether coming from a 9mm round from a handgun like the trusty Glock 17, or from a 5.56mm round from your favorite AR-15, will produce about 160dB of noise.  By comparison, a jackhammer is about 110dB and an ambulance siren is about 120dB.

With a suppressor attached, a gunshot will typically be reduced to about 120dB.  At ambulance-siren level noise, not even James Bond would be able to take out patrolling bad guys without alerting the entire evil lair.

What is important, aside from how cool any gun looks with a suppressor attached, is that the gunshot is noticeably quieter, about equivalent to you wearing earplugs vs none at all.  For those of us who spend a lot of time around firearms, either while hunting, or just spending time shooting at targets downrange, anything we can do to reduce the amount of noise from a gunshot goes a long way.

So What’s the Big Deal?

Of course, when you make the argument that suppressors are to help with our hearing, many people, especially those with no experience with actual suppressors (or even firearms), think you’re just trying to get your hands on suppressors to make your guns into silent killing machines.

Obviously, law-abiding gun-owners, who have already gone through background checks to purchase firearms in the first place, will immediately turn to a life of crime and go on a killing spree if they are given the opportunity to purchase a suppressor. 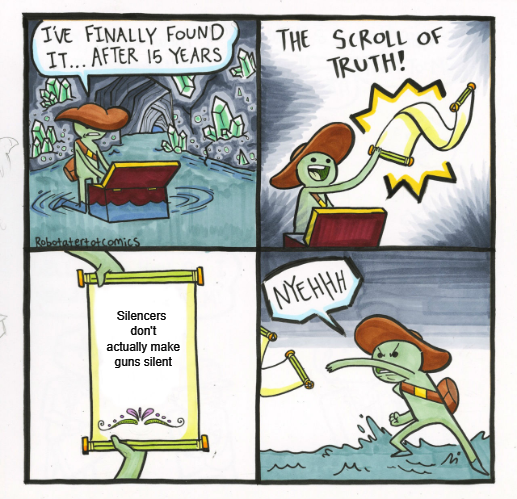 It’s that type of thinking that initially led to suppressors being put in as part of the National Firearms Act of 1934 (NFA).  Even back in 1934, gun-grabbers were out to make sure as few people had access to firearms as possible, let alone anything they thought would make firearms more deadly.

As part of the NFA, lots of legal hurdles were put in place to make it as annoyingly difficult as possible for individuals to buy suppressors.

Today, while it is not impossible to buy a suppressor, you must:

After you’ve done all that, you just need to wait up to 14 months to see if you are approved for your suppressor!

Oh, also, your information will be entered into a database of suppressor owners. Just your typical Big Brother stuff.

If you live in a state where suppressors are legal, congratulations on living in the United States of America!  Just follow those steps, shell out the $200, and wait over a year to get your suppressor. If you don’t, know that 42 other states allow for legal ownership of suppressors.  That’s over 80% of the country. Just saying.

And no, the $200 isn’t a typo.  There might be typos somewhere else in this article, but that $200 isn’t one of them.  That amount was set when the NFA was passed back in 1934, with the idea that charging a high tax would discourage people from even bothering to try and buy a suppressor.  In 2019 dollars, the $200 tax would be a little under $3800. With that kind of money, most people would probably spend it on more guns or ammo rather than on buying a single suppressor.

The good news is that the $200 tax has not changed since 1934.  The bad news is that nothing else in the NFA has changed either.  The same hurdles are still in place as they were over 80 years ago.

A New Challenger Has Appeared!

Luckily for us, some of the representatives in elected office are actually trying to do their jobs and, you know, REPRESENT the voters.

What’s more, these representatives have been making a push in recent years, as early as 2015, in removing some of the obstacles in our way to getting suppressors.

The Hearing Protection Act (HPA) was introduced by a Republican House Representative from Arizona back in 2015.  If passed, the law would have removed suppressors from the NFA, and made the requirements for getting a suppressor the same as those for buying long guns.  Basically, buying a suppressor would just require a background check through the NCIS database to make sure you aren’t a criminal, and you’d be good to go.

For some reason, allowing hunters and firearms owners to protect their haring by placing the same requirements that allow people to own guns onto the purchase and ownership of suppressors wasn’t all that popular with our elected officials, and so the HPA bill never went anywhere.

In 2017, there was another push for the HPA, but it was inserted as part of the SHARE Act, which was a pro-2A bill that was aimed at reducing unnecessary burdens on hunters, fishermen, and gun-owners.

The SHARE Act, in addition to increasing federal funding for public shooting ranges and opening more federal lands to hunting, fishing, and shooting, would have removed suppressors from the NFA, eliminated the $200 tax, and required the destruction of the registration records of current suppressor owners.

Even with a Republican majority in the House of Representatives and the Senate, the SHARE Act didn’t get anywhere, and so died again.

Now, in 2019, the HPA has been reintroduced as its own bill, with basically the same goals as the 2015 and 2017 versions.  Unfortunately, with a Democrat majority in the House of Representatives, it’s likely going to suffer the same fate as the previous attempts, and die out before it gets anywhere.

While you can hold out hope for some miracle that the HPA 2019 will pass the House, make it through the Senate, and eventually to the President’s desk to be signed into law, the best chance gun-owners have at having the HPA pass would be if Republicans were able to regain the House and maintain their majority in the Senate in the 2020 elections.  That means we need to get out and vote.  Even you, guy reading this blog on the toilet.

If the HPA is re-introduced once again in 2021, as it was in 2015, 2017, and 2019, and manages to pass through Congress and is signed by President Trump, then get ready to line up for your suppressor orders, because everyone and their grandma will be at the local gun store trying to get their hands on one.

Of course, the HPA passing into law doesn’t do much good for the gun-owners living in states where suppressors are illegal.  For those gun-owners, you’ll have to travel to a neighboring state to try out a suppressor and see what you’ve been missing out on.

And who knows, it may be just the kick in the butt you need to convince you to move to a free state.  If not, you can always stay behind enemy lines and try to win back some of your 2A rights at the ballot box with your fellow gun-owners.

For the time being, it’s unlikely any progress will be made in the law, at least until 2021 if the Republicans can regain the majority in the House, and the Senate and White House remain under Republican control. 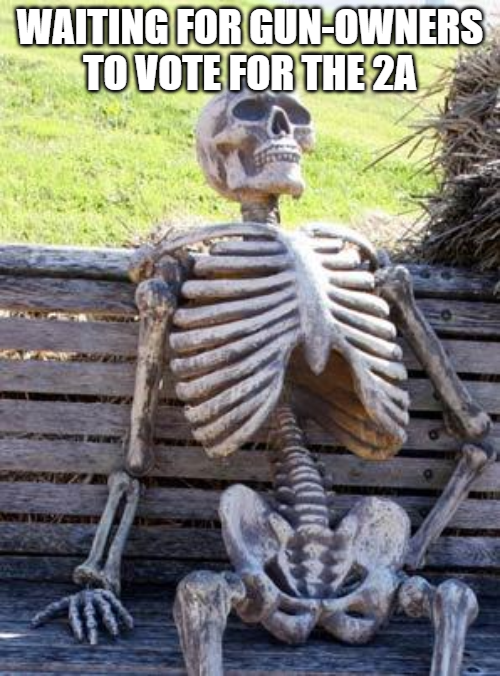 In the meantime, we can all go out and inform our fellow gun-owning friends, and even those who aren’t interested in firearms, on why suppressors aren’t the scary tubes that make guns silent, but are actually just useful tools to help preserve our hearing so we can continue to hear the sweet sounds of our rounds hitting steel downrange.

Now go out and pew pew!

Do you rock a suppressor on your rifle/pistol? What kind? Let us know in the comments! Otherwise check out our Best Suppressor Companies…and even Best Electronic Hearing Protection.

Written By Paul Yen
Paul was a little late in getting into the firearms game, but since that fateful handgun purchase in his 20's, he's had a newfound appreciation for the Second Amendment. A patent attorney by training, he puts his legal background to good use by translating the ever-growing number of firearms laws into actual English for gun enthusiasts and freedom-loving firearms owners everywhere.