States across the country all have their own laws on carrying a handgun, and when it comes to carrying concealed, things are even more confusing.

As one of the most gun-friendly states in the country, Alaska has almost no restrictions on carrying a concealed handgun.

We’ll go over the few laws that you do need to keep in mind when carrying concealed in Alaska, and also the steps to getting a CCW permit from the state.

No permit is required to carry a concealed handgun in Alaska.  That doesn’t mean just anyone can carry though!

To carry a concealed handgun, you must:

Even though you are allowed to carry concealed, anywhere firearms are prohibited by state or federal law is obviously off limits.  This means places like courthouses, police stations, jails, etc. should not be the place to test out that new IWB holster you just got.

And along those lines, when you enter someone else’s house, you must notify the resident that you are carrying a concealed handgun.  Don’t want any surprises!

Even though Alaska doesn’t require a CCW permit, it is still a good idea to get one for those times when you travel out of the state, as Alaska’s CCW permit is recognized by many states throughout the US.

Since Alaska does not even require a permit to carry concealed in the state, when it comes to issuing CCW permits for out of state carry, it is a shall-issue state.  This means that Alaska will issue a CCW permit as long as you meet the requirements and submit a complete application.

To qualify for a CCW permit, you must: 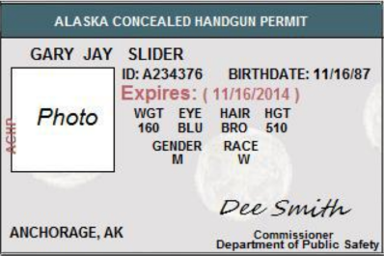 To actually apply for the CCW permit, you must fill out the application (duh!) and submit it in person to the Department of Public Safety (DPS) or to a local police station that is authorized to accept the applications.

Along with the application, you’ll need to provide fingerprints, an ID photo taken in the last 30 days, and some other basic identification information, along with an $87 fee.

After that, it’s just a 30 day wait to get your brand new CCW permit.

Your CCW permit is only good for 5 years.  You can renew your application 90 days before it expires all the way up until 60 days after it expires.  If you wait more than 60 days after your permit expires, you will need to apply for a brand new CCW permit, with all the of the requirements as before.

Getting a CCW permit in Alaska isn’t nearly as exciting as getting one in another state, mostly because you could always carry concealed in Alaska even without a permit.  But, with your brand spanking new CCW permit, you’ll be able to carry concealed in any of the 38 states that have reciprocity agreements with Alaska.

And if you’re just visiting…

Alaska recognizes CCW permits from any other state, so if you’ve already got one from your home state and are just stopping by, feel free to keep that Glock tucked under your shirt!

How About that Virginia Loophole for 28-State Reciprocity?

It’s really just a super easy way to get your CCW with an online course.

You see, Virginia will give you a “nonresident concealed handgun permit” for taking and passing an online course.  This permit then grants you CCW privileges in 28 states.

Check out the 28 states and the most popular course here from Survival Life.

And that’s all you need to know about carrying concealed in Alaska!  To learn about the general gun laws of the state, check out our Alaska Gun Laws section.