Paranoia is a hell of a salesman.

While we certainly believe in being prepared for a worst-case scenario in which you may need to protect yourself or your loved ones – it’s also important to keep your preparedness grounded in something resembling reality.

That being said, if you’re still determined to arm yourself with a menagerie of Final Fantasy-tier weapons that will almost certainly get you killed if you have to use them, read on, you magnificent neckbeard.

Amazon delights in catering to your katana-based power fantasies.

Disclaimer that a bunch of this stuff is illegal in many areas, so be sure to double-check your local and state laws.

Top 10 Most Neckbeard Self Defense Items

Perhaps the most theoretically effective self-defense tool in this cursed list are these multicolored, questionably shaped pokey pens. While multiple reviews mention that they’re way too large to actually carry on your key chain, we imagine they’re probably pretty decent at ending an altercation before it starts if you were able to just wave them around menacingly.

We’re not super sure if ‘Anti-Wolf’ is a mistranslation or if the manufacturer is actually advocating these for use against wild predatory canines, but whatever – your power level’s off the charts, right?

The amount of items that show up in a search for ‘self-defense’ is… worrying. It took us a bit of scrolling to figure out that this appears to be some sort of magician’s trick device, inexplicably being marketed as a self-defense tool as well. Because if there’s one thing we love about a potential self-defense weapon, its the inclusion of exposed wiring and shoddy soldering.

Ahem. “The performer enters the stage, hands seemingly empty, then WHAM-suddenly a flash of brilliant fire streaks out of his hand, traveling up to 15 feet! This fantastic little gun is small enough to easily conceal in your hand, yet creates an astoundingly large effect.”

Yes, of course – the ol’ fireball to your assailant’s face. A classic – and it’d probably look pretty dope at your LARP events too.

We’d like to think that whoever was writing this product advisory was maimed by their handheld warlock grenade before they could finish this sentence.

Look man, we’re not here to tell you what to do, and we’re certainly not experts, but we will say this: If you’re ever in a position where you have to defend yourself, and you produce a thing that looks like a gun but isn’t capable of killing someone, you have made a comical number of tragic mistakes.

“The best air pistol is the one you have with you, or so the saying goes”, the product description helpfully offers. It is worth nothing that literally no one has ever said this.

We get the feeling we’re wasting our breath here though – if you’ve already convinced yourself that an EDC pellet revolver is your best defense option, we’re sure you’ve already done the mental gymnastics necessary to think you’re gonna be poppin’ fools in the eyes before making your ninja-smoke bomb exfil.

What is it about swords that consistently attracts the nerdiest dudes around? The perceived honor? The air of nobility? The glimmer of chivalry? No matter how many hours you’ve put into studying the blade, we can guarantee that any romantic weeb fantasy about drawing a probably insanely illegal sword concealed in an umbrella sheath when it’s not raining is going to be dashed upon the rocks of reality faster than you can tip your fedora.

We’d like to think that there’s a sort of sliding scale at work here. While weird blunt weapons and idiotic swords are one thing, the realm of throwable weapons definitely occupies a higher tier of cringe than their melee counterparts. You’re not going to hit anything you would ever actually need to, and the idea of having a sharpened edge next to the webbing of your palm gives us second-hand anxiety. Chill out and stick to playing Yu-Gi-Oh!, Gambit.

Are you good at fist fights? Awesome! You should probably just use your martial prowess wisely and stay away from fisticuff-based gimmicks. Would you like to own a taser? Cool! They’re definitely valid self-defense weapons, and their ability to be used at a stand-off range with an assailant is one of their bigger advantages.

Or yeah, maybe just take the worst parts of fist fighting and shock weapons and roll them into one ultra stupid combo item. It’s fine – Police use them, see? Says so right on the body.

Probably a pretty dope +10 weapon on successful stealth attacks on your Dungeons and Dragons character, but probably also going to get you laughed out of whatever swap meet you bought it from, the punching bone claw gauntlet is a celebration of the middle-schooler in all of us. Effective? Absolutely not. Would it have looked badass if you scribbled it into a Trapper Keeper when you were 13? Duh.

Truth be told, we have no idea what these are or how they’re intended to be used – but we’re very busy people, and we don’t really have the time to be researching pog-based melee weapons, ok? Nevermind, we read the product description and now wish we hadn’t:
“Attach to back strap of your cap. If confronted with a hostile situation, raise your arms up to protect your face. Grab the bill of your hat, whipping it off and striking your attacker. Also attaches to your watch band or shoelaces.”

They go on your hat. You know, real low-profile. Just a normal dude out for a stroll with sharpened metal disks attached to my Molon Labe cap. Stop looking at me.

While we’re sure multiple people have already been struck in the face with normal fidget spinners during the height of their popularity, now you can do it tactically. Oh, this old thing? Haha yeah, it just helps me concentrate and *WHAM*, bet you won’t pick on me again, will you Mike? 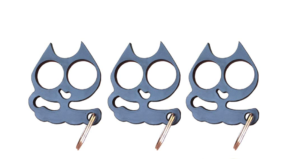 Nothin’ to see here folks – just a cute little vaguely cat-shaped keychain trinket with creepily large eyes and an ambiguous expression. What’s that? A weapon? No, I don’t think so – it’s

Let us know below!

Or if you’d like some more effective things to stop baddies in their tracks…check out our  Best Pepper Spray and Best Non-Lethal Weapons and Ammo articles.

Editor’s Picks Our favorite guns and gear that we've tested and fully recommend. Check Now
get my new online course Click below for a FREE LESSON! Learn the 3 most popular shooting stances & more. watch now!