In the 1970s, Col. Jeff Cooper, a rifleman’s rifleman if there ever was one (and firearm safety rules guy), pioneered the idea of a general purpose rifle that would work in a variety of roles from hunting to defense.

The concept was dubbed “the scout rifle,” and Cooper refined it over the years until his death in 2006.  Cooper believed in the “scout,” a man who “acted alone, not as a member of a team.”

“One round, one hit and then vanish!” – that was his motto.

He did not need an assault rifle.  He needed a scout rifle.”

So Cooper set out to create the perfect rifle for this man.

Now, this isn’t ‘Nam, this is scout rifles… there are rules, rules so stringent that not even Ruger’s Gunsite Scout, designed with help from people at Gunsite who knew and worked with Jeff Cooper, lives up to Cooper’s vision.  I’m not talking about the political “if it has a magazine, it’s an assault rifle,” kind of rule, either, where they’re deliberately vague. Cooper’s vision was specific for very specific reasons:

Not so easy to find now, is it?

Cooper’s requirements come for good reasons.  A bolt-action rifle is typically lighter than a semi-auto and less prone to failures.  It has to be light-weight because whoever’s using it is running through the wilderness with it for long periods of time.

It needs to be short enough to not snag on brush as you’re walking, but the barrel has to be long enough to retain range and power.  It should have iron sights as well as a scope because scopes break.  It needs enough power to take out an unarmored target, human or animal, weighing in at 500 pounds.

The sling should be able to support your arm during a shot, not just be a way to haul the weapon around.

Bipods are okay, but Cooper felt they were almost useless in rough terrain and could become a dangerous crutch for a shooter to get addicted to.

A long-eye relief scope allows a shooter to hit a target at range while retaining their peripheral vision.  (Okay, I know this is kind of a faux pas, but it’s the best way I can come up with to describe it. You know how when you’re playing Call of Duty, and you’re using a sniper rifle, and while you’re looking through the scope, some random asshole named HelloKitty@$$Face comes around the corner and tags you in the side of the head from like eight feet away because you couldn’t see him come up on you? That’s the reasoning behind the long eye relief scope.  You can see the world around you and maintain situational awareness.) 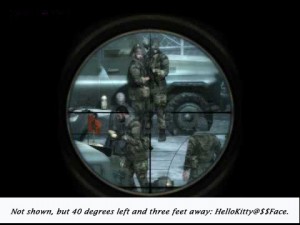 Cooper was big on shooting with both eyes open, and with a low power scope mounted forward of the receiver, you can do that pretty well.

It also makes it easier to load the weapon with a stripper clip, and you can hold the weapon around the receiver, the rifle’s center of gravity, when you’re hauling ass away from a bear big enough to laugh at .308.  The downside is that it doesn’t do well in low-light conditions, and during sunrise and sunset you can get a glare off the glass that makes the scope useless.

So this is hardly just a rifle with a weird-looking scope.

Cooper didn’t give a dump about making the rifle look nice.  Function came before form, and yet the end results are pretty nice looking rifles.  The Mannlicher (or Steyr) Scout, a rifle Cooper approved of, has sleek lines and looks almost futuristic for a bolt-action rifle.

But should you get one of these general, all-purpose, do-anything, ass-kicking rifles designed by one of the most brilliant men in the firearms field since John Moses Browning descended from Heaven to present man with the 1911?

In several words, allow me to explain.  I’ve heard the scout rifle described as “a solution looking for a problem,” and unfortunately, in the modern world, that’s true.

This is a frontiersman’s rifle.

It’s a rifle you use when you don’t know what you’re going to shoot tomorrow, but it’s a pretty good bet you’re shooting something.  On paper, that sounds great, but in the modern world, how many people live that life?  What it excels at is doing everything “okay.”  You can use it for hunting, but it’s not going to be as good as a regular hunting rifle.

Look, in the modern world, guns are like women’s shoes.

There’s a right kind for every occasion, and even if a person doesn’t know what kind of gun they want, they have a good idea in the back of their mind why they want a gun just like a woman may not know specifically what brand of shoes she needs, she knows she wants shoes for dancing at a wedding.

“But what’s the harm in getting a scout rifle if that’s what I want?” you ask.

Hey, I’m all for getting what you want.  And you’re right, the above reason, in itself, is not enough to determine that a scout rifle is the wrong way to go.  However, there’s another factor that, when combined with the above, makes me say no to a scout rifle.

The MSRP for a Ruger Gunsite Scout is about $1,000.  A Steyr Scout, the over-the-counter rifle that comes closest to Cooper’s vision is $2,000.

Custom-made scout rifles that accurately reflect Cooper’s concept can run past $4,000.  For the price of a Scout, I could buy my AR15 ($1,000), my Ruger American ($380) and my FNP-9 ($500).  That’s an awful lot of money for a bolt-action rifle that doesn’t hunt well during the morning hours when the deer are actually out and about.

I just think it came too late.

The guys who explored the heart of Africa in the turn of the century probably would have been jazzed to have scout rifles with them.  It’s the kind of rifle Teddy Roosevelt would have wanted to carry while wandering around the American west.  But those frontiers aren’t frontiers anymore, and the scout rifle is a rifle that excels in a frontier.