In the world of revolvers, snub-nosed models are frequently suggested for concealed carry (especially if you’re a female).

But are snubbies really ideal?

I have a Smith and Wesson Model 642 Airweight chambered in .38 Special I’ve been running intermittently for years and wanted to share my experiences with you guys.

Whether you’re snubby-curious or already a fan, this is for you.

But first, a quick dive into the gun’s history.

Smith and Wesson have been in the J-frame game for quite a while – almost seventy years – and the Model 642 is one of their more popular designs.

So, what’s so unique about J-frames?

The frame shape is named that as a tip of the hat to their old revolvers dating back to the late 1800s.

Back in 1894 Smith and Wesson had two frames available, I-Frame and K-Frame, only they weren’t called by those names.

At the time the guns had longer names but when company employees began calling them by their alphabetical designation rather than their official model name, Smith and Wesson gave in and followed suit.

It was 1950 when they first introduced the J-Frame and quickly took over the company’s line.

There are quite a few guns in the Smith and Wesson catalog referred to as J-Frames; at the time of this writing, there are four chamberings and four series models offered in this frame.

In fact, if you add up all the possible options there are more than three dozen variations available. You could say it’s a popular design.

The 642 is actually a modernized version of Smith and Wesson’s Model 42 Centennial Airweight.

It has an enclosed hammer which should not be confused with a shrouded hammer.

Enclosed hammers are inaccessible to the shooter meaning you are firing this gun double-action only, all day, every day; shrouded hammers give shooters access to the hammer, albeit it limited access, so single-action shots are possible.

A common complaint about shrouded hammers is lint and foreign objects getting into the shroud and mucking up the hammer. With an enclosed hammer that isn’t a concern but you’d better be capable of nailing those double-action-only shots.

This is a snubby, of course, so the stainless steel barrel is a scant 1 and 7/8 inches long. The cylinder and crane are also stainless steel which is good for durability and the frame is an aluminum alloy, making it lighter weight.

Grips are the usual black synthetic and are panels rather than a sleeve. The Model 642 Airweight has an integral groove rear sight and integral front blade sight which has the benefit of not shifting if the gun is knocked around but the downside of being harder to acquire on targets.

It’s chambered in .38 Special, +P rated, and has a five-round capacity.

The first thing you notice about the Smith and Wesson Model 642 Airweight is its diminutive size (obviously).

This is where hand size comes into play.

My hands are not small; my fingers are long and I like double-stacks quite a bit. This revolver, however, is small. It has an overall length of 6.3 inches and an empty weight of 14.6 ounces, making it easier to conceal but presenting a bit of a challenge when it comes to gripping it. 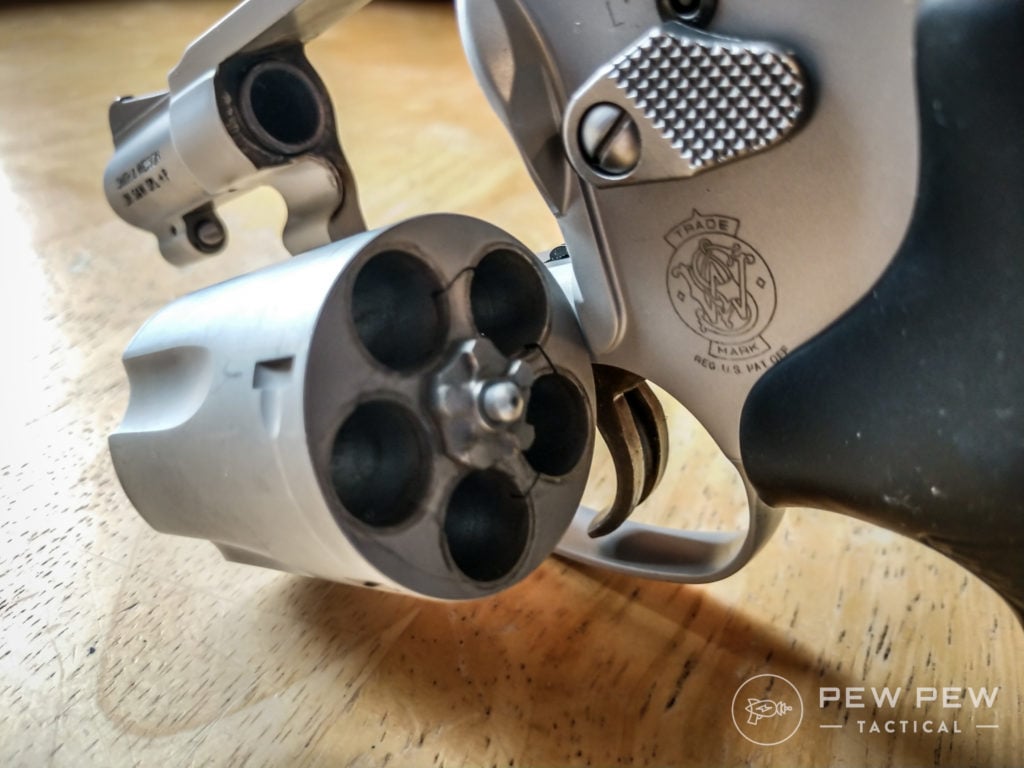 With a thumbs-down grip the pinky of my strong hand is completely off the butt of the gun and my ring finger is barely holding on. As for my support hand only my index and middle finger make firm contact with my other hand.

Reach to the trigger is understandably abbreviated as well so prepare to need practice with this gun.

All that said, the gun is not difficult to grip firmly. This is not a case of a pistol recoiling enough to disturb your grasp but simply a case of it being small enough to require a bit more care.

This is just one of many reasons we always say to train with the ammunition you carry; the felt recoil and muzzle rise of the gun with good self-defense rounds is far more than what you get with a box of American Eagle .38 Special 130-grain FMJs.

Let’s move on to accuracy.

This is a .38 Special +P-rated snubby made to meet deep concealment needs. From its enclosed hammer to its short barrel it’s ideal for snag-free concealed carry.

That means it does suffer a bit for accuracy. At a distance of ten yards firing slow, deliberate shots my best five-shot group was around 2.5 inches.

From five yards, doing a playing card drill, I did produce a group that stayed on the playing card and some shots landed neatly together but it was not as precise as I prefer my playing card groups to be.

This is a reliable gun. I’ve had this Model 642 Airweight for years now and it’s been flawless.

Understanding they can fail and knowing what to do about it when they do is a vital part of your firearms education.

Devil’s in the Details

There are a few things to keep in mind with this gun. First, for revolvers across the board you will be gripping thumbs down. If you’re used to firing semi-autos with your thumbs forward alongside the slide this will be an adjustment for you.

You can use the thumbs-down grip with semi-autos, too, and I have found it works better for certain models than thumbs-forward. My thumb position always depends on the size and shape of the specific gun.

The gun is snappy. After all, it’s a snubby; this should come as no surprise to you. Felt recoil and muzzle rise are certainly controllable but you do notice and it does affect accuracy. Practice, practice, practice. 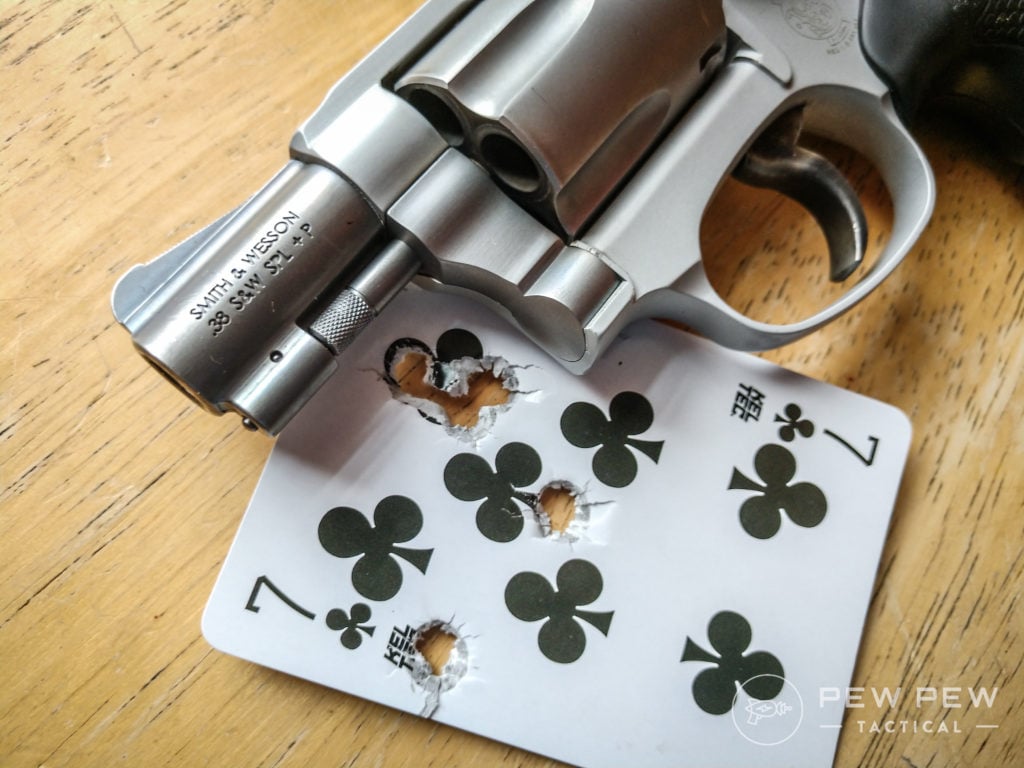 Regarding the effective range of a short-barreled revolver such as this Model 642, here’s the thing: how’s your shot placement? The obvious answer is that smaller handguns like this one are meant for closer range use.

That doesn’t mean they cannot be used at longer distances but it does mean the further out you get the more difficult it will be to get shots on target (and you’ll be losing velocity and energy faster with the 1 7/8-inch barrel).

Consider utilizing a Model 642 as a BUG – BackUp Gun – or, if it’s your main carry, understand it is best used within approximately ten yards. Shot placement is king and the farther away you are trying to fire this gun the sloppier your hits will be.

As always, train hard and be familiar with the capabilities and limitations of your chosen firearm.

There is no arguing the Model 642 is a reliable gun. It’s eaten every type of ammo I’ve thrown at it over the years and will likely continue to do so for years to come. Just remember, revolvers can fail (this one just hasn’t yet).

It’s a snubby .38 Special so I don’t expect a stellar fit to my hands. It’s a small gun with grips angled in such a way I find shooting Weaver actually suits it better than Isosceles. The grips do not fill my hands; my hands engulf the gun. As long as you go into this knowing it’s a small gun and concessions must be made you’ll be fine. If I were to rate this ergonomically compared to other similar-sized guns I would add a star because it is better-designed than many micro semi-autos I’ve run.

Okay, so this is a tough one to rate. If you only use this gun at close ranges and spend time practicing with it, it’ll get the job done. Don’t expect it to be precise and don’t think it will perform well at longer distances, because it won’t. Consider this your BUG gun for use when your assailant is getting up-close-and-personal.

You just cannot customize a small revolver like you can, say, a Glock. It’s possible to Cerakote your revolvers and swap out the grips but that’s about it. I’d go with even fewer points for customization but it seems unfair to expect a little revolver to be highly customizable so we’ll go with a three.

Yes, this gun is a good value. It’s well-made, durable, and highly concealable. For its close-range purpose, it is quite well-suited and fits the bill for many shooters. It does the job it was intended to do and won’t break the bank.

The S&W Model 642 Airweight is the perfectly sized pocket pistol, which makes it ideal for a back up gun or deep concealment. Unfortunately, the small size makes it hard to aim and keep on target. But if you’re getting up-close and personal, this will get it done.

However, the barrel length is detrimental to accuracy and has a negative effect on follow-up shot placement. It would not be my first choice for self-defense use. Of course, if you just want a good BUG or a fun little shooter, go for it.

Smith and Wesson does good work on their guns and the Model 642 Airweight is no different, just not my personal shot of whiskey.

Do you carry a J-Frame? How do you like it? Let us know in the comments! If you want more awesome .38 Spl options, check out the Best .38 Spl Revolvers and Best .38 Spl Ammo. 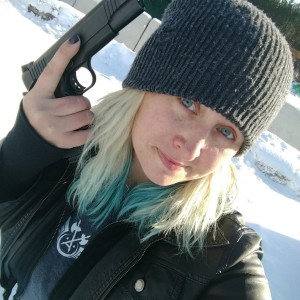