If you are old enough to buy a gun, you’ve probably heard the partisan internet warfare that modern, polymer handgun designs have produced in the gun-owning public.

Though it’s slowly dissipating, the gun world has had a love-hate relationship with polymer as a component of firearms construction since its debut in the 1950s.

As recently as the 1990s, the stock Glock trigger was a common reason why one might refuse to own such a pistol. It was, in fact, perceived to be so bad that it precluded people from owning any Glock products.

Oddly enough, it’s now commonly held that the stock Glock trigger (indeed the whole Glock, except for the stock plastic sights) is the standard by which all other modern handguns are judged out of the box.

So how did we go from polymer handguns being derided as “combat Tupperware” to becoming the darling of custom gunsmiths producing “Roland Specials” for your average concealed carrier?

Join us as we take a trip down memory lane and see how we got here.

In the 1950s, Remington looked into manufacturing an affordable .22 semi-auto, and for the first time, modern synthetic materials were considered for gun parts.

Fortunately for Remington, DuPont was their parent company, and the two developed the Nylon 66, named after the proprietary material DuPont had developed.

It was thoroughly tested and found to be remarkably reliable. With help from some clever marketing, including a world-record torture test involving over 100,000 hits on 2.5-inch wooden blocks, the Nylon 66 was a runaway hit.

With the way for plastic firearms parts thoroughly paved by Remington’s commercial success and the AR-15’s military success in the 1960s, the first true commercial polymer handgun was the H&K VolksPistole 1970.

Not only did the VP-70 use the same plastic furniture concept that lined Remington’s pockets so effectively two decades prior, but the action was a revolutionary double-action only (DAO) striker-fired system.

This may seem like a natural combination if you are a fan of poly pistols. Most such guns today use the same design, but this was the first time the two had been paired.

Despite being as fantastically modern as the Nylon 66 had been for its era, the VP-70 was designed as a partisan weapon to help the west fend off the Red Hordes due in Paris any day.

Those hordes never came, and neither did the orders, but perhaps more detrimental to sales was the famously awful trigger.

The VP-70 was a success only as a groundbreaking concept. As a weapon, it is an interesting and unusual but poorly reviewed collector’s item today.

Despite the abysmal reception of the VP-70, one person certainly seems to have taken notice of the things it did right — Gaston Glock.

Developed for the Austrian military, the Glock 17 took features the VP-70 had already debuted and added even more unusual traits like the total lack of external safety on a semi-auto pistol.

At a time when the average police sidearm was either a revolver or a steel-framed DA/SA, or SAO pistol, this was immediately polarizing. But in 1980, it was readily accepted by the Austrian Armed Forces as a high-capacity, easy to learn, and easy-to-shoot sidearm.

Vetted by a western military, Glock set its sights on the massive American law enforcement market, and the lack of an external safety actually helped here.

Switching from a revolver to a semi-auto in the early 1980s involved learning a very different manual of arms and adapting to shooting a much heavier weapon.

Additionally, guns like the double-action Sig Sauer P220 or Smith & Wesson Model 59 would have a very heavy trigger pull on the first shot and a much lighter one for subsequent shots. The first squeeze of the trigger cocked the gun and fired, while the action did the cocking for follow-up shots.

The Glock 17 had a consistent trigger pull that, while not 1911 crisp, was a dramatic improvement over the VP-70, no external safety, and weighed quite a bit less than its contemporaries.

Cops accustomed to revolvers found it simple and easy to operate, much like their predecessors in the Austrian Armed Forces.

An early and substantial law-enforcement discount, as well as clever marketing strategies, catapulted the company and polymer pistols, in general, to the forefront of the firearms market and public consciousness.

While holdouts and diehards would abound through the early 2000s, it was apparent that the idea was here to stay by the beginning of the 2010s.

The Glock was no longer alone and had now begun to share the market with guns like the Springfield Armory XD. Likely taking the feedback of those very diehards, Springfield included a grip safety on their plastic frame and addressed some of the more common complaints about the Glock design.

The very things about Glocks that appealed to the police market had dogged them in the civilian one, and the XD took full advantage.

Springfield’s supposed Glock-killer rapidly became a successful example of polymer frame pistols and is still considered by many to be the standard alternative to Glock to this day.

However, Springfield was hardly the only one to jump into the plastic handgun game. Today, there are innumerable poly pistols for sale from nearly every manufacturer.

Sig Sauer, H&K, S&W, Berretta, Walther, CZ, and many others have their own successful versions, be they striker or hammer fired, with every feature combination you could want.

The last several decades have seen the rise, and some would say domination of polymer pistols in the military, sporting, and civilian collection and concealed carry markets.

Its concept has been refined quite a bit since 1980, and many newer competitive and concealed carry gun owners even regard traditional steel-framed pistols as a curiosity to explore outside their normal training time.

Where do you fall between SAO steel-framed guns and DAO polymer wonder-gats of the future? Let us know in the comments below. If you’re in the market for something polymer that’s not a Glock, check out our article on the Best Non-Glock Alternatives. 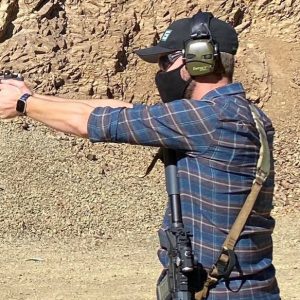 Written By Lars Smith
Lars Smith has been writing professionally about guns and culture since 2018. An avid student of defensive handgun and Historical European Martial Arts, Lars comes to the gun community from a history in marketing, agriculture, and biology, bringing a sometimes unusual perspective to things. He divides his free time between travelling the American West, getting his gun and sword school fix, and spending as much time as possible outdoors in his native Pacific Northwest.