Do you want a short barreled shotgun (SBS) without all the NFA paperwork, the excessive 200 dollar tax stamp, and the monumental wait time?

Not really me, but Mossberg.  And it’s not really a shotgun, so it’s not an SBS.  It’s also not an NFA weapon.  I’ve basically lied to you.

What I’m talking about today is the Mossberg 590 Shockwave ($449)…a 12 gauge pump action firearm.

It’s not a shotgun, although it really looks like one.  In fact the Mossberg 590 Shockwave is literally only classified as a firearm.  The Shockwave is a fairly unique firearm…and a fairly freaking cool one to boot.

So how is it not a shotgun?

So if you judge a shotgun as a weapon that fires shot then you’re right…it’s a shotgun.  However, the U.S. Government does not classify shotguns in that manner.

Don’t ask me why, just remember the ATF once turned all shoe strings into machine guns.

So under U.S Law, a shotgun is a weapon designed or redesigned to be fired from the shoulder.

If it is not a shotgun it cannot be a short barreled shotgun. 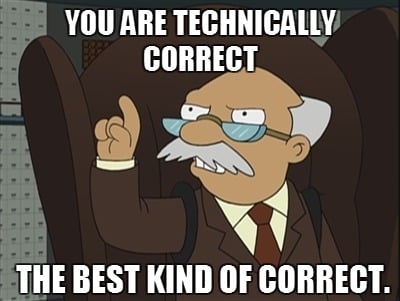 Because the Shockwave never had a stock to allow it to be fired from the shoulder it is not a shotgun.  It’s also over 26 inches long, which ensures it does not fall into the separate NFA category known as AOWs.

So it becomes a firearm.  Nothing more, nothing less.

If you want to know more, just check out the ATF’s letter to Mossberg about the Shockwave.

This is the federal ruling, some states have their own odd definitions.  So in some states this may be a short barreled shotgun, check your state laws.  Surprisingly, this is illegal in Texas.

What’s not surprising is the Governor of Texas just signed a bill making them legal, so before the end of the year Texans will be allowed to own the Mossberg 590 Shockwave.

So What is the Shockwave?

The Shockwave is a 12 gauge firearm that is 26.5 inches in length.  It’s built as a Mossberg 590 with a 14 inch barrel and a 5 round tubular magazine.

The end result of this combination is a NFA free 14 inch barrel twelve gauge.

This is a very compact and powerful weapon.  Since technically it’s not a shotgun I am not going to be referring to it as a shotgun.

Instead we’ll stick with scattergun.

Why’s it called the “Shockwave”?

What’s interesting is the grip of the weapon, which is where the Shockwave title comes from.  Mossberg 590 Shockwaves are outfitted with the Shockwave Raptor grip.

This semi pistol grip makes it so the overall length of the weapon is over 26 inches.

You cannot install a standard 90 degree pistol grip unless it has some kind of extension to keep the overall length 26 inches or more.

Grip It and Rip It

The Shockwave grip isn’t just a gimmicky grip to produce a short scattergun.  The grip itself is superior to  any pistol grip only option I’ve ever used.

Normally firing any serious load from a PGO shotgun is just downright painful.  Fortunately, you can also purchase the Shockwave Technologies Raptor Grip ($24.95) for the Mossberg 500 and Maverick 88, making it a good option for any pistol-grip shotgun.

The Shockwave Raptor grip is much more comfortable when firing standard buckshot loads.  It doesn’t shoot back into your wrist painfully like a normal PGO shotgun.

Instead the recoil is more or less pushed upwards instead of rearward.

The Shockwave Raptor Grip is vastly superior to the any other pistol grip I’ve ever handled.

Inevitably the first few questions people start asking about the Shockwave are about how to shoot it and how it handles.

A lot of folks get the idea that these weapons can only be fired from the hip.  That is simply not true.

When I say the Raptor grip is good at reducing recoil I mean it’s relative to pistol grip shotguns.  The recoil is still stout, just much better than the standard pistol grips.

The scattergun wants to recoil upwards and it’s good to use that energy to manipulate the pump. This isn’t a weapon you intend to fire fast, the lack of a stock makes it difficult if not impossible.

Reduced recoil buckshot like this Fiocchi Law Enforcement Reduced Recoil 12 Gauge ($64.00)  is a bit better if you want to rapid fire, and the Aguila mini shells are by far the easiest to rapid fire.

Ultimately if putting tons of lead downrange is your goal for a shotgun invest in a full sized tactical semi auto model.

Let it be said, this gun is super fun to shoot, and challenging to shoot well.  I like to think I’m an experienced shotgunner, but this bad boy put me in my place.

The lack of a stock does make it a less than stable platform. 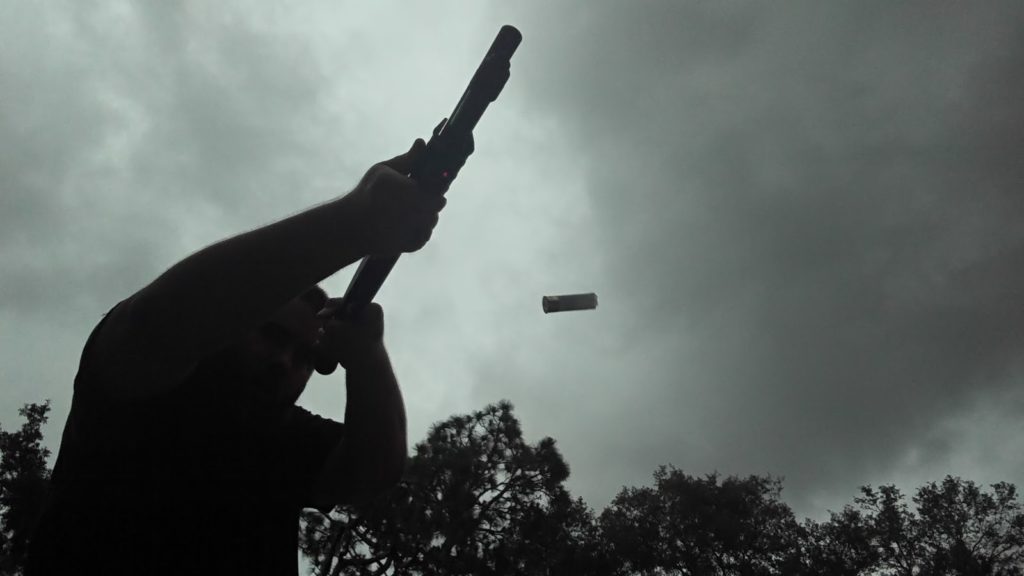 You really have to put in some range time to master this bad boy to engage targets rapidly and effectively.

Rapidly being relative to the platform itself.  The lack of a stock and 12 gauge recoil ensures you need to understand the fundamentals of handling a powerful firearm.

This is not a weapon for inexperienced shooters.  A lot of idiots think it’s okay to hand new shooters powerful hand cannons and laugh at the recoil.

This is both dumb and unsafe.  The same could be said with handing an inexperienced shooter this gun with any kind of buckshot or slugs.

New, or inexperienced shooters in general shoot stick to the Aguila mini shells, or cheapo light weight birdshot until they understand how to handle the weapon.

The mini shells function well with Mossbergs, and the addition of the Opsol Mini Clip ($15.00)  makes them function perfectly.

This all being said, the gun performs as designed.  The pump powerfully ejects shells from the weapon, and reliably feeds round after round.

The Shockwave comes equipped with a simple bead sight, but it tapped for a scope rail.

While a standard bead is okay, you really need a cheek weld to effectively use one as designed.

The stockless nature suits itself much better to a red dot sight and the XS massive front sight is infinitely easier to use as an iron sight.

The trigger itself is pretty standard for a shotgun.  Lightweight, a short pull, with a bit of grit and overtravel.

However, it is a shotgun so such things are only important when it’s bad.

The Rundown on the Shockwave

As you’d imagine the Mossberg 590 Shockwave is a very well made scattergun.  The 590 series is trusted by the USMC as their combat shotgun, and yours truly was issued one for a very short period of time.

I really like Mossberg shotguns and have always held them in high regard.

It’s ambidextrous and works perfect with the Raptor grip.

The elevator is the standard anti jam model designed for military use.

The Shockwave has a front sling swivel, but no rear sling swivel.  This things begs for a one point sling on it.

The Mossberg 590 comes equipped with a forend that features a strap to keep your hand in place.  I don’t necessarily like this design, and found the screws recoiling backwards into my hand.

This eventually become quite painful as it broke the skin.

I’ve since replaced my pump with a Magpul variant I modified to fit the weapon.  The standard Magpul pump DOES NOT fit the Shockwave.  You either need to modify the pump, or purchase an adapter from Hogue.

The Limitations of the Shockwave

If you purchase a Mossberg 590 Shockwave you need to approach it understanding its limitations.

Without a stock the platform is nowhere near as stable as a shotgun.  The Pistol grip only configuration has severe limitations.

You won’t keep the max effective range of an average shotgun, and even with slugs you are limited to under 50 yards to be effective.

Reloading is also more difficult since you are left holding a 5.35 pound gun with one hand.  With a stock you can still maintain two points of contact to reload.

Being able to reload the shotgun is essential to effectively using it in any kind of competition our tactical application.

We’ve already discussed the higher levels of recoil, but I’ll mention it one more time.

The small platform does offer a few advantages.  First and foremost, it’s much more compact and maneuverable. It’s almost as maneuverable as a handgun inside a building.

It offers helluva lot more firepower than a pistol too.  There is something to be said about using a similar platform used by the U.S. Marshals.

The U.S. Marshals seemed to like the guns when escorting witnesses to and fro.

I’d imagine the movement portion being extremely dangerous and the best time to strike for would be hitmen.  A small scattergun would be a powerhouse inside a vehicle.

However, I doubt many of us reading this will ever be in that situation.

The Mossberg 590 Shockwave is another one of those fantastic discoveries in the hideous nature of confusing gun laws.

It’s not really taking advantage of a loophole, but it’s a convenient means to obtain a powerful and compact firearm.

Ultimately if your goal is a defensive weapon I’d suggest a Mossberg 590 standard or even better the 590A1.  Or check out our complete list of the Best Tactical Shotguns.

The addition of a stock provides you with a much more stable, easier to reload, and easier to aim and fire weapon.

If you want a fun gun or a range toy, or if you are protecting witnesses from gangsters the 590 Shockwave is for you.