The early 2000s was the era of dark, grim movies, trench coats, and sci-fi. It created some real edge lords and cringy fashion, as well as some very stylish movies.

While the Matrix will always be the king of this trend, we can’t forget Equilibrium.

WWIII is blamed on human emotion, and people are forced to take a compound that eliminates emotions. If you don’t take the compound, you get whacked.

The Grammaton Clerics are elite-level law enforcement, and since they are so dang special, they require special guns. The special guns are never named but are only ever seen in the hands of the Clerics.

Those in the know can tell that they’re highly modified Beretta 92 series pistols. 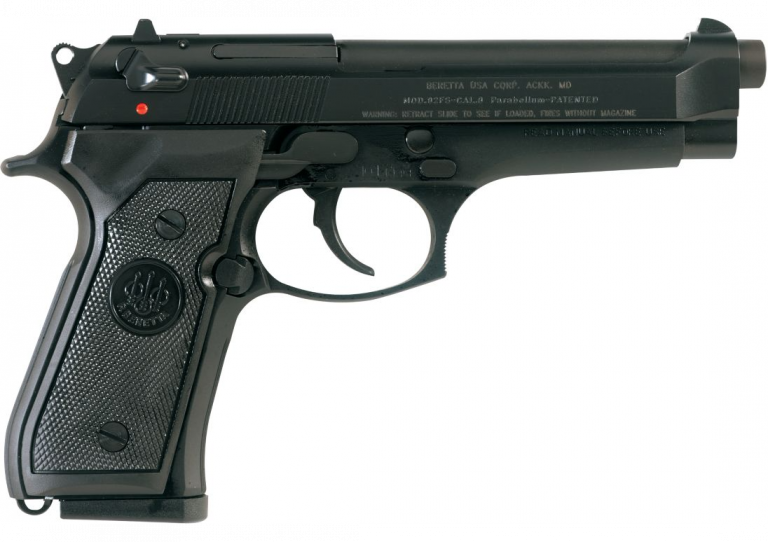 Modifications include a massive addition to the slide, frame, and barrel that seems to be nothing more than a weight.

It’s not a compensator and not anything that seems exceptionally useful. It sure does look cool.

Another addition is the M16 style selector switch that allows the shooter to move between semi and auto.

These weapons also emit a muzzle flash that’s absurd for a full-sized 9mm, and the flash is actually the same symbol on the nation’s flag.

A neat detail but not very accurate for a 9mm handgun.

Also, the magazines have varying baseplates. One has stubs built into it for pistol-whipping, and another has weighted base plates that allow them to stand up on the ground for crazy reloads.

Speaking of reloads, Clerics have mechanical arms attached to their arms that will reload the gun for them.

In reality, the Beretta 92 is a practical duty pistol that served the United States military for decades.

It’s a 9mm handgun that does have Beretta’s unique open slide design that does lend to a rather futuristic appearance. The weapon is large and does look good on screen.

It has starred in a number of roles, including in legendary films like Die Hard and Lethal Weapon.

The film uses martial arts mixed with gun fighting called “gun kata.” It’s explained that gun kata treats the gun as a total weapon. To which I ask, compared to treating the gun as half a weapon?

Each fluid position represents a maximum kill zone, inflicting maximum damage on the maximum number of opponents while keeping the defender clear of return fire.

According to the film, mastery of gun kata will increase your firing efficiency by no less than 120%. It’s a gobblygook of words that sounds right but says nothing.

It translates to the Clerics spinning around, firing in all manner of different directions.

It’s absurd, and I thought it was so cool when I was 12. The guns shoot an impossible number of rounds, and while reloads occur, they are nowhere near as frequent as they should be.

Equilibrium clearly goes for more style than realism. This era of films was filled with stuff like this. It’s all style with no grounding in reality. That’s fine. I don’t need Act of Valor gun fighting in a sci-fi flick.

This film might not hold up well 20 years later, but it was plenty cool for the era. Sadly it flopped hard, and we never saw a sequel or any additional world-building. Equilibrium died and took gun kata with it.

What did you think of Equilibrium? Give us your thoughts in the comments below. For more Guns of Pop Culture, head to our Fun Category!